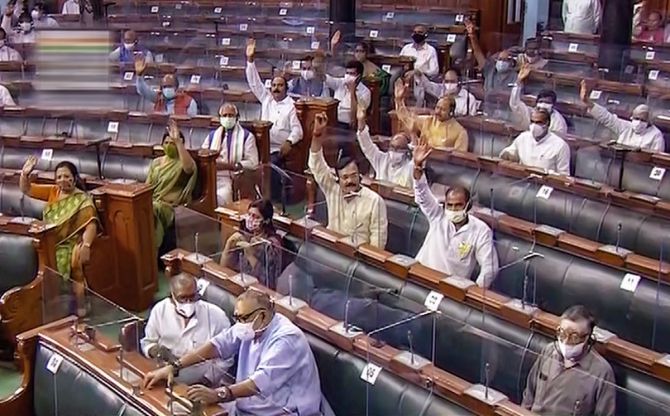 Lok Sabha on Thursday passed two bills before the proceedings were adjourned for the day amid continuous protests by opposition members over the Pegasus spying row and farmers' issue.

The Airports Economic Regulatory Authority of India (Amendment) Bill 2021 and The Inland Vessels Bill, 2021 were passed without debate.

When the House met at 2 pm, Kirit Premjibhai Solanki, who was chairing the proceedings, took up the two bills.

He urged the protesting members to go back to their seats.

Similarly, Ports, Shipping and Waterways Minister Sarbananda Sonowal moved the Inland Vessels Bill, 2021, which seeks to provide safety of navigation, protection of life and cargo and prevention of pollution that may be caused.

Earlier in the day, Speaker Om Birla had expressed his displeasure over the unruly behaviour by some opposition members, and said he was "very hurt" over Wednesday's incident.

On Wednesday, when papers were being laid in the House, Congress members Gurjeet Aujala, TN Prathapan, Hibi Eden and some others had thrown business papers of the day as well as torn pieces of paper and placards at the Chair.

A piece of the torn placard landed in the press gallery just above the Speaker's podium.

As the Opposition continued their protest on Pegasus snooping controversy and three farm bills, Birla adjourned the House till 11.30 am.

After the Question Hour ended at 12 noon, Rajendra Agrawal, who was chairing the proceedings of the House, asked protesting members to go back to their respective seats.

"We are starting Zero Hour, please go back to your seats," he appealed to the members. Soon after he adjourned the House till 12:30 pm.

Adhir Ranjan Chowdhury, Leader of the Congress in the Lok Sabha, said the opposition has not been able to put forth its point due to the stubborn attitude of the government.

Rajya Sabha adjourned for the day

The Rajya Sabha proceedings were adjourned till Friday amid continuous protests by opposition parties over the Pegasus snooping controversy, farm laws and price rise.

After the House resumed after lunch at 2 pm, the government introduced the Factoring Regulation (Amendment) Bill, 2021.

Finance Minister Nirmala Sitharaman introduced the bill amid the protest and sloganeering by the Opposition members and said it will provide relief to the micro, small and medium enterprises sector.

The bill will help the sector ensure a smoother capital cycle and healthier cash flow, she added.

Deputy Chairman Harivansh Narayan Singh, who was in the chair, asked the agitating Opposition members, who had trooped into the Well of the House, to return to their seats.

He called the members to participate in the discussion on the bill.

However, barring those from the ruling BJP, AIDMK and TRS, who supported the bill, no one turned up for the discussion.

Singh then called Sitharaman for her reply and the bill was passed.

After that the deputy chairman adjourned the House till Friday 11 am.