'Never before had I heard or seen anyone of this age dying due to COVID-19. This is the first I believe. The situation is really scary' 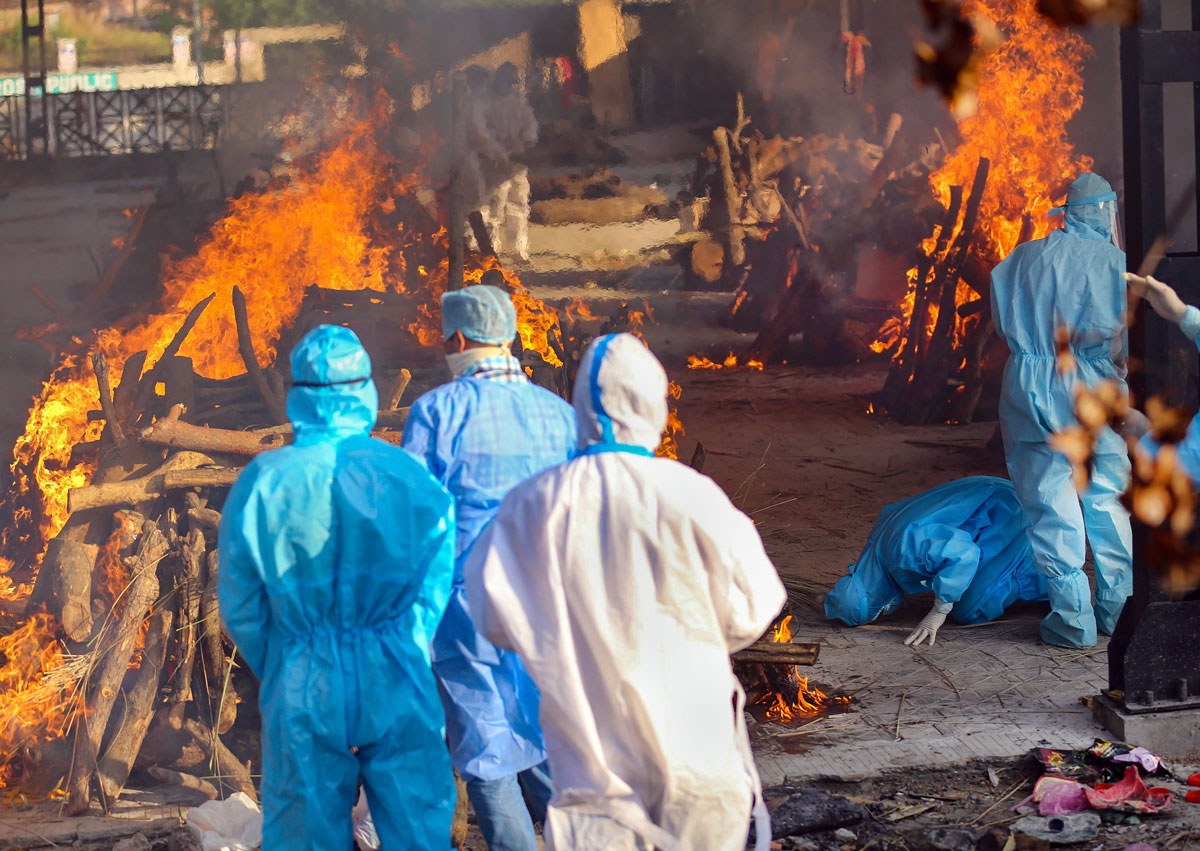 IMAGE: Family member wearing PPE kit perform the last rites of a COVID-19 victim, at a Cremation Ground in Jammu. Kindly note that this image has been posted for representational purposes only. Photograph: PTI Photo

Nine-month-old Krishu, the only child to his blind parents, succumbed to COVID-19 at a Delhi government-run hospital on Thursday, while his father, battled the deadly virus at another hospital.

This was the second time in two days that Singh was burying a child so young.

The 59-year-old humanitarian, who has given dignified cremations to over 2,000 strangers during the second wave of COVID-19, buried five-month-old Pari on Wednesday evening, near the spot where Krishu now rests.

A relative of Krishu told PTI the boy was the only child to his parents who live in Dilshad Garden in East Delhi.

"Both the parents are blind," he said, choking on his tears.

Krishu's mother contracted the infection around 18 days ago and since she breastfed the child, he also became ill, the relative said.

A few days ago, Krishu was admitted to the Guru Tegh Bahadur Hospital, where he died in the early hours of Thursday.

His father, Shashank Shekar, 26, is battling for his life in the Rajiv Gandhi Super Speciality Hospital in Tahirpur.

"He doesn't know he lost his beloved Krishu today. Now, I don't want to lose his father too," the mother, Jyoti, said, as she broke down over the phone.

Pari's father, Prahlad, 30, a resident of Nand Nagri in Northeast Delhi, said his "Laali" had been running high fever for some days.

"We took her to a private clinic nearby. When her condition deteriorated, we rushed her to Chacha Nehru Bal Chikitsalaya in Geeta Colony, where doctors conducted an RT-PCR test, which came out positive," he said.

The family was sent to the Guru Tegh Bahadur Hospital where Pari was put on ventilator support on May 6.

Her mother, Reema, would spend the entire day at the hospital burning incense sticks and praying continuously, the father said.

Pari succumbed to the infection around 11:30 am.

"This broke our heart. I had never imagined that I would have to bury such small children here. I won't be able to forget it easily," Singh, the ex-BJP MLA, said, adding that no parent should have to be bury their child.

Children so young don't not even know how to express to their parents what they feel. This should not happen to anyone, he said.

"Never before had I heard or seen anyone of this age dying due to COVID-19. This is the first I believe. The situation is really scary," he said.