Kashmir remained on the edge on Friday as a fresh order asking tourists and Amarnath yatris to leave the Valley triggered panic among the residents as they started stocking up dry ration and essentials, fearing long law and order disturbance.

The state government issued an advisory to Amarnath pilgrims and tourists to curtail their stay in Kashmir immediately.

'Keeping in view the latest intelligence inputs of terror threats with specific targeting of the Amarnath Yatra, and given the prevailing security situation in the Kashmir Valley, in the interest of safety and security of the tourists and Amarnath Yatris, it is advised that they may curtail their stay in the valley immediately and take necessary measures to return as soon as possible,' an order issued by Principal Secretary, Home Department, Shaleen Kabra here read. 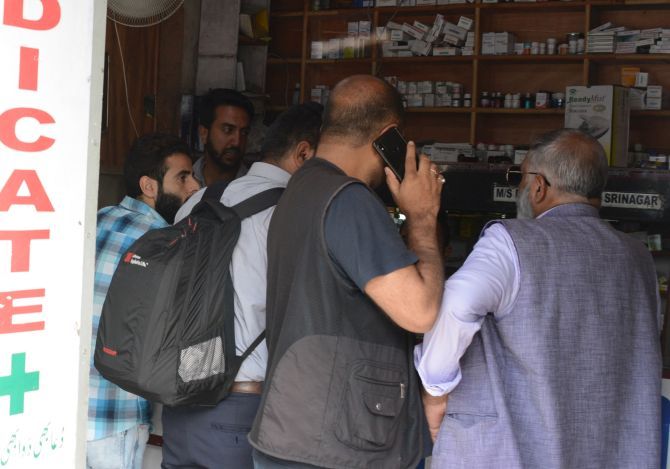 IMAGE: People line up outside a medical store in Srinagar. Photograph: Umar Ganie for Rediff.com

The deployment of the troops and various orders gave rise to the speculations about some major decision in the offing regarding the Jammu and Kashmir's special status.

Apprehending deterioration in the law and order situation, people were seen lining up at departmental stores in the city and elsewhere to stock up dry ration and essentials.

Earlier in the day, the Army said Pakistan-based terrorists are planning to target the Amarnath Yatra in the Valley.

But security forces are up to the task to foil any such design, it added.