Awarded the Padma Vibhushan, the Padma Bhushan and the Padma Shri, Pandit Jasraj also popularised semi-classical music like ‘haveli sangeet' and reached out to devotees with his ‘bhajans', a particular favourite for his fans being “Om Namo Bhagavate” in praise of Lord Krishna. Mozart, Beethoven, Pavarotti and Jasraj are up there in the skies somewhere, planets all in a cosmos of stars big and small.

On Monday, Pandit Jasraj died in his New Jersey home, the voice that soared and swooped for over eight decades to touch a chord with music lovers the world over, falling silent forever.

It was only last year in September that the International Astronomical Union named a minor planet after Jasraj, an honour that was previously only reserved for classical greats like Amadeus Mozart, Ludwig van Beethoven, Luciano Pavarotti -- and then Pandit Jasraj.

The Hindustani vocalist, the first Indian to be honoured so, was considered a great stalwart of classical Indian music.

With a voice range that travelled 3.5 octaves, Pandit Jasraj appealed to the most fastidious aficionado looking out for the smallest nuance as well as the untutored fan who just sat back and enjoyed the music flow over her.

Jasraj, who was from the Mewati gharana, belonged to the league of great vocalists such as Bade Gulam Ali Khan, M S Subbulakshmi and Bhimsen Joshi.

The Haryana born Jasraj made classical music accessible to all with his soulful renditions of ‘khayal' mixed with ‘thumri'.

It was not just about the voice but also perfect diction, clarity in ‘sur' and ‘gayaki'.

Such was his command over ragas that Pandit Jasraj would sometime wake up in the middle of the night to compose a ‘bandish'.

He is credited with creating new ragas such as ‘abiri todi' and ‘patdeepki' besides introducing a new style of ‘jugalbandi', the ‘Jasrangi'.

It was never just about the purists.

Awarded the Padma Vibhushan, the Padma Bhushan and the Padma Shri, Pandit Jasraj also popularised semi-classical music like ‘haveli sangeet' and reached out to devotees with his ‘bhajans', a particular favourite for his fans being “Om Namo Bhagavate” in praise of Lord Krishna.

He clearly had a feel for Urdu too.

The music legend, who celebrated his 90th birthday in January this year, also had great love for ghazals and once wistfully quoted the popular Ghalib ghazal, Hazaaron khwahishen aisi ki har khwahish pe dam nikale to describe all the things left undone in his life.

Born on January 28, 1930 in Haryana's Hisar district, Pandit Jasraj was initiated into classical music by his father, Pandit Motiram and honed his craft under the guidance of his elder brother Pandit Maniram.

In fact, Pandit Jasraj started his musical journey as a tabla player.

The turn towards singing came perhaps after he heard Begum Akhtar's voice.

He was just a schoolboy then. 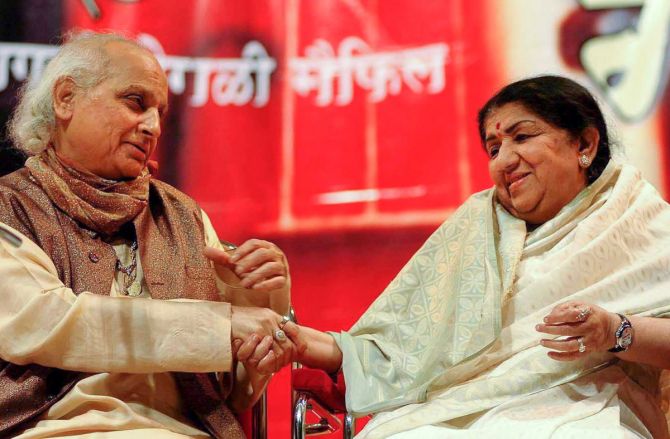 Describing this change, Pandit Jasraj had told PTI Bhasha in an interview that he started learning tabla with his elder brother Pandit Maniram but turned to classical singing at the age of 14.

“While going to school in Hyderabad, there was a hotel where Begum Akhtar's ghazal Deewana banana hai to deewana bana de, varna taqdeer tamasha na bana de used to play. The hotel owner would play the same ghazal every time.

“And my feet would stop there. Such was the pull in her voice that I could not take a step forward so I started spending more time in the hotel instead of the school,” he had said.

His first public concert was for Nepal king Tribhuwan Bir Bikram Shah in 1952.

Sixty-eight years later, he recalled in vivid detail what had happened.

“The king told his men to announce that he has awarded me 5,000 gold coins. I was shocked, I couldn't believe it. I was sweating and I almost fainted, I was maybe 22 years old then,” he told PTI in an interview in January this year.

He also spoke about being self critical and never giving up on riyaz despite advancing age.

The musician, like his music, was completely in sync with the times.

"I teach through Skype. I suggest everyone do it. I am walking with time and that's what one should do. I don't like when people say Woh zamaana achha tha (Those were the good times).

"I believe the current phase is good. One should not compare it with the past -- good or bad. One has to walk with time and only then you will like the current time," he said in the interview.

Talking about his fondness for Lata Mangeshkar, he had said, “She is my favourite singer. There is no one like her”.

He loved listening to music from every part of the world and was someone who could appreciate the Beatles and Mehdi Hassan as much as he did Bhimsen Joshi.

The couple has a son, Shaarang Dev Pandit, and a daughter, Durga Jasraj, both musicians.

Pandit Jasraj's first song was in 1966 with the bhajan Vandana Karo in raga Ahir Bhairav for his father-in-law V Shantaram's Ladki Sahyadri Ki.

The bhajan was composed by Vasant Desai.

The second film song came almost after a decade in the 1975 movie Birbal My Brother, for which he collaborated with another legend, classical vocalist Pandit Bhimsen Joshi, on a 'jugalbandi' in raga Malkauns.

His rendition of raga Ahir Bhairav was also used by filmmaker Ang Lee in his Hollywood movie Life of Pi.

Pandit Jasraj will live on -- in his endless recordings and also in the many students he mentored.