India on Thursday said Pakistan's attempt to "polarise" and "politicise" the Kashmir issue using lies and deceit at the United Nations Human Rights Council has totally failed and that world community was well aware of its credentials. 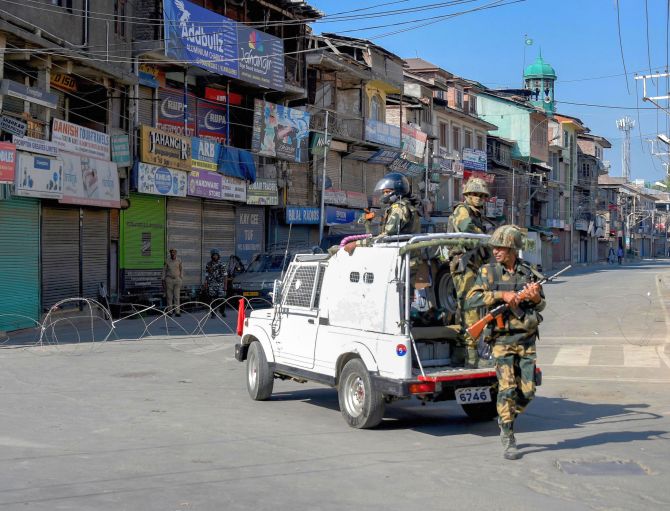 External affairs ministry spokesperson Raveesh Kumar said it was quite "audacious" on the part of Pakistan, a country which is "epicentre of terrorism", to pretend to speak on behalf of the global community on human rights at the UNHRC session at Geneva.

Kumar also sought to question Pakistan's claim that around 60 countries have supported its joint statement on the human rights situation in Jammu and Kashmir, which it said was submitted to the UNHRC.

"The UNHRC has 47 countries as members. They (Pakistan) are claiming support of 60 countries," he said, adding India does not have the list of countries which Pakistan claimed supported it.

On Pakistan's campaign against India on Jammu and Kashmir, Kumar said Pakistan needs to understand that "repeating a lie four or five times does not turn it into a gospel truth".

Last month, India abrogated provisions of Article 370 of the Constitution to withdraw special status of Jammu and Kashmir, and bifurcated the state into two union territories.

Pakistan reacted angrily to the move and has been unsuccessfully trying to rally international opinion against India on the issue.

The global community is aware about Pakistan's role in aiding, abetting and supporting terrorist infrastructure which they have in their country, Kumar said at a media briefing.

"Pakistan's attempt to polarise and politicise the situation that has been rejected at the (UNHRC), it was very clear. The global community is aware about Pakistan's role in aiding, abetting and supporting terror infrastructure which they have in their country," he said.

His remarks came two days after India and Pakistan engaged in a war of words over the Kashmir issue on Tuesday at the UNHRC with New Delhi stoutly defending its "sovereign decision" to revoke Jammu and Kashmir's special status, an issue on which Islamabad demanded an international investigation by the global rights body.

"It is quite audacious on the part of Pakistan that the country which is harbouring terrorists, which is the epicentre of terrorism, is pretending to speak on behalf of the global community on human rights," Kumar said.

"Their record of persecution of minorities, both ethnic and religious, I don't need to amplify... The credibility of the messenger here is highly suspect. This is something which the global community is aware of," he said.

Kumar said the international community is well aware of the reasons behind India's decisions on Jammu and Kashmir and the steps being taken to ensure normalcy in the region.

He said every effort is being made to bring the situation to normal in Jammu and Kashmir.

"Full focus is on returning the situation to normalcy. Some restrictions on communications and preventive detentions have been made, as per law, at local administration level based on the ground situation with a view to maintain public law and order," Kumar said.

"These are being reviewed continuously and being eased based on the ground situation," he said.

The MEA spokesperson said some section of the international media is resorting to incorrect reporting about the situation in Kashmir Valley.

Noting that government is giving boost to economic activities, he said it will procure 1.2 million metric tonne of apple, committing over USD 800 million, to support livelihood for the farmers.

"Hospitals and medical facilities are functioning normally. There is no shortage of medicines. In Srinagar, 1,165 out of 1,666 chemists shops are open. In Kashmir valley, 65 per cent of the 7,630 retail chemists and 4,331 wholesale chemists are open," he said.

He said banking and ATM facilities operating normally and cash is regularly loaded so that public do not face any difficulty.

"More than 14 million USD equivalent Indian rupees have been disbursed through J&K Bank ATMs alone. (Doesn't include ATMs of other banks)," he said.

"92 per cent of the area of Jammu and Kashmir have no restriction. Earlier, restrictions had been imposed by local administration in some parts to maintain law and order. Some day time restrictions remain in only 11 of the total 199 police stations," he said.

He said government offices have been made fully functional from August 16.

Kumar said 20,339 schools are open and classes are being conducted.

He said landline telephone communication has been restored and all telephone exchanges are operational.

"Mobile connectivity has been restored in 13 of the 22 districts. It includes Kupwara and Handwara districts in Kashmir," he said.