'No serious talks with India are possible without discussion on Kashmir'

'Expect no breakthrough, but minimum agenda is to reduce tension'

Putting the onus back on India, Pakistan NSA Sartaj is ready to go ahead with talks, but without any 'pre-conditions' 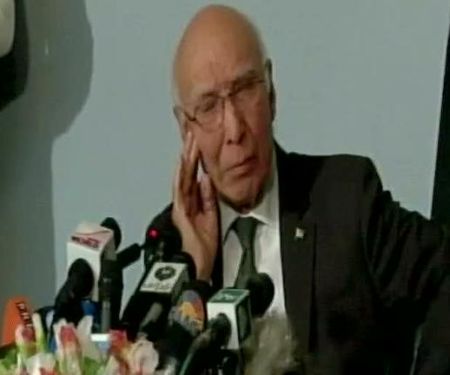 Putting the onus back on India, Pakistan on Saturday said it was prepared for National Security Advisor-level talks without any pre-conditions amid continuing signs that the meeting was unlikely to take place.

Pakistan NSA Sartaj Aziz, who is scheduled to travel to New Delhi on Sunday for talks with his Indian counterpart Ajit Doval, told a press conference in Islamabad that he is ready to travel to India as per schedule but without any pre-conditions.

He was sharply critical of the Indian government for its insistence that he should not meet Kashmiri separatist leaders while in New Delhi and said this was akin to controlling the guest list for a reception being held for him at the Pakistan high commission.

"Cancellation (of the talks) is yet to be confirmed from either side. Therefore, we are ready to go as per schedule without any pre-condition," Aziz said.

Given that there is no likelihood of India changing its stand that separatist Hurriyat had no role in Indo-Pak talks, the possibility of NSAs meeting is remote.

The Indian position will be clear later on Saturday afternoon when External Affairs Minister Sushma Swaraj meets media at 4 pm in New Delhi.

Aziz termed as nothing "further from the truth" the Indian External Affairs Ministry statement that Pakistan was trying to distort the agenda agreed at Ufa and imposing new conditions for the talks.

"The statement of Indian external ministry that Pakistan has imposed new conditions totally ignores the last sentence in the note handed over to the Indian high commission that Pakistan is ready to hold NSA-level talks without any pre-conditions," he said while addressing the press conference at the foreign office.

Responding to a question, Aziz said, "Pakistan wishes to resolve all issues with India on the negotiating table, but no serious talks with India are possible without discussion on the core issue of Kashmir."

He said Pakistan has prepared three-point agenda which included terrorism, progress on decision made at Ufa and discussion on all outstanding issues that includes Kashmir. "Is it conceivable that India would cancel first ministerial meeting on such a flimsy grounds relating to meeting with Hurriyat leaders," he said.

In provocative remarks, Aziz said he will be carrying three dossiers on India's Research and Analysis Wing activities in Pakistan. "If I don't get opportunity to hand over the dossiers to Indian NSA in New Delhi, I hope to give it to him in New York next month if he comes with PM Narendra Modi" for the United Nations General Assembly session.

He was asked about reports in the Indian media that Doval will hand over dossiers to Aziz stating that underworld don Dawood Ibrahim, whose presence in Pakistan has been denied by Islamabad, is very much in that country.

Aziz said a major theme being played up in the Indian media was that Pakistan was apprehensive of the dossier Doval would present to him during the NSA talks and was therefore looking for an exit. "After handing over these dossiers to Mr Doval, I can then also share them with the UN Secretary General," he said.

He refused to share the contents of the dossiers about alleged Indian interference in Pakistan but displayed it to the media.

Aziz said that he did not expect any breakthrough during the talks, but the minimum agenda was to reduce tension and set a course for future talks.

Aziz said he was disappointed that India had virtually cancelled the first-ever NSA-level talks and it would be second time New Delhi has gone back from a commitment to hold talks with. India had called off foreign secretary-level talks in Islamabad last year, protesting the Pakistan high

"The reason for this regretful second cancellation if it is happening, would be the same," he said, adding that the invitation to three-four Kashmiri leaders to a reception organised in New Delhi on Sunday was to "enable me to meet a cross section of Indian political and business leaders."

He urged global think tanks and foreign policy experts to ponder over why India wanted to cancel the first ministerial interaction on such "flimsy grounds". "Even more ironic is their alibi that Pakistan was trying to distort the agenda agreed at Ufa and was imposing “new conditions” for the talks.”

Accusing India of going against the Ufa summit, he said, "Everybody knows what is the most important outstanding issue -- it is Kashmir.”

Aziz said that the Modi government wanted to deal with Pakistan "on his terms" by keeping Kashmir on the backburner, which is not acceptable to Pakistan.

Asked about the detention of Shabir Shah and two other separatist leaders, who are slated to meet Aziz, on their arrival in Delhi, the NSA condemned such action, saying it was violation of their basic rights.

"We are very disturbed about arrest of Hurriyat leaders. It is violation of their fundamental rights," he said.

Aziz said that India was running diplomacy through the media and trying to give impression that Pakistan army was not supportive of talks. Rejecting such talk, he said that the entire nation was on the same page.

He said the most important part of the Ufa statement was that India and Pakistan have a "collective responsibility" to ensure peace and promote development and are prepared to discuss "all outstanding issues" and that the "K word is very there in the Ufa statement". He said India was making its own interpretations of the Ufa understanding. "Both the countries are bound to hold talks on different issues under the Ufa agreement," he said.

"We had agreed to discuss all outstanding issues and Kashmir is definitely part of it. India feels that terrorism is only Pakistan's issue. Pakistan has already shared evidence of Indian involvement in terrorism with the United Nations," he said.