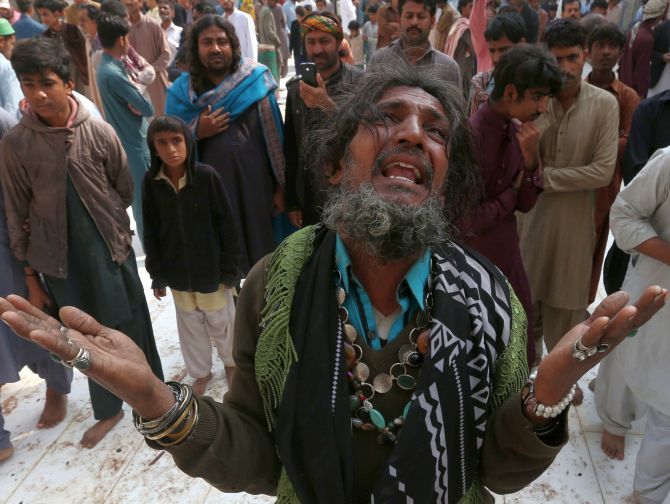 Pakistan Army on Friday claimed to have killed more than 100 suspected terrorists in retaliation to a Islamic State suicide bombing at a crowded Sufi shrine in Sindh province that claimed 88 lives.

The media wing of the army, ISPR, said a "sizeable" number of suspects have also been arrested since Thursday night, when a Islamic State bomber blew himself up at the popular shrine of Lal Shahbaz Qalandar in Sehwan in the southern province.

The statement did not specify where the militants were killed or about the arrests and said "details will be shared".

The blast was one of the deadliest in Pakistan in years and a continuation of several terrorist strikes in the country this week, despite the army's offensive against militants.

Pakistan Army has launched combing operations across the country, including Punjab province.

Immediately after the blast, Pakistan claimed the bombing was planned in militant sanctuaries across the border in Afghanistan, threatening renewed hostilities between Kabul and Islamabad.

The army claimed it has found linkages to militant support networks operating from Afghanistan and it has closed the border due to security reasons after the bombing on Thursday night.

Pakistan Army began an operation in Shalman area near the Pakistan-Afghan border, using heavy artillery fire, reports said. The border with Afghanistan at Torkham has been shut.

"No cross-border or unauthorised entry will be allowed into Pakistan from Afghanistan," it said.

Afghan diplomats were earlier on Friday summoned to General Headquarters in Rawalpindi by the Army, which lodged a protest over the use of Afghan soil by terrorists to carry out attacks in Pakistan.

The Afghan officials were also handed over a list of 76 terrorists hiding across the border and directing or supporting terrorist activities in Pakistan, the statement said. "Afghan government has been asked to target them and hand them over to Pakistan."

Army chief Qamar Javed Bajwa assured the people, saying the "hostile" agenda will not be allowed to succeed "whatever it may cost".

"Army is for security of people of Pakistan against all types of threat. Nation to stay steadfast with full confidence in their security forces," he was quoted as saying in the statement. Officials said the crackdown against militants would be intensified in the coming days.

"After the string of terrorist attacks in the country in the past week, the government and military are on one page and the crackdown was ordered," a top government official said about the operations by security forces across Pakistan.

The crackdown was launched simultaneously by federal and provincial governments after at least eight terror attacks rocked Pakistan in the past week. The attacks began with a suicide bomber targeting a protest rally outside the Punjab assembly in Lahore on Monday, killing 14 people.

The same day a terrorist attack was foiled in Quetta, but two officials of the Bomb Disposal Squad were killed while defusing the bomb. Terrorists also carried out attacks in Mohmand agency and Peshawar followed by shrine blast in Sindh.

Image: A man mourns the death of a relative who was killed in a suicide blast at the tomb of Sufi saint Syed Usman Marwandi on Thursday evening. Photograph: Akhtar Soomro/Reuters