Dialogue is the only way to address outstanding problems between Pakistan and India, as both countries cannot afford wars, Pakistan Prime Minister Syed Yousuf Raza Gilani has said.

Gilani made these comments during the first-ever live telecast from the PM House, in a programme that was a joint presentation of the Pakistan Television and a private network.

In reply to a question whether there was any hope of a breakthrough in talks with India, he said resumption of dialogue was the only way forward, as no issue could be resolved through war.

"Although (Indian Prime Minister) Manmohan Singh agreed in several meetings with me that bilateral talks should not be made hostage to the (Mumbai attacks) tragedy, the Indian rulers seem to be under political pressure at home not to make any compromise with Pakistan," the Dawn quoted Gilani, as saying.

He noted that he had held several meetings with his Indian counterpart, including the Sharm el-Sheikh meeting, during which they "made a commitment that both countries cannot be held hostage to the Mumbai incident alone."

"However, when Manmohan Singh went back to India, there was pressure on him in Parliament as well as public pressure, and so no progress could be made," Gilani added. 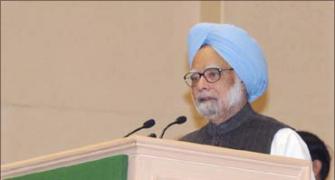 PM meets Vajpayee, greets him on his birthday