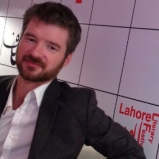 The Pakistan government has ordered the expulsion of The New York Times' Islamabad bureau chief ahead of the landmark polls in the country, accusing him of "undesirable activities", the newspaper has said.

The Times has strongly protested the move and is seeking his reinstatement.

The ministry did not give any detailed explanation for the expulsion order, which was delivered by police officers in the form of a two-sentence letter to the bureau chief at 12.30 am (local time) on Thursday at his home.

"It is informed that your visa is hereby canceled in view of your undesirable activities," the order stated. "You are therefore advised to leave the country within 72 hours."

Walsh, 39, is a veteran correspondent who has lived and worked in Pakistan for nine years, most of it for The Guardian newspaper of Britain.

He was hired by The Times in January, 2012, and has written extensively about the country's violent political convulsions, Islamist insurgency and sometimes tense relations with the United States, which has been conducting drone attacks on militants in Pakistan's border areas with Afghanistan.

Jill Abramson, the newspaper's executive editor, expressed concern about the order in a letter of protest to Pakistan's Interior Minister Malik Muhammad Habib Khan, describing Walsh as a "reporter of integrity who has at all times offered balanced, nuanced and factual reporting on Pakistan."

She asked the minister to reinstate Walsh's visa.

The accusation of undesirable activities, she wrote, "is vague and unsupported and Walsh has received no further explanation of any alleged wrongdoing."

The timing of the order was also a surprise, she wrote, as it coincided with the general election which is regarded as an important democratic milestone.

"The expulsion of an established journalist, on the day of the voting, contradicts that impression," she wrote.

Walsh said the circumstances of the expulsion order's delivery were highly unusual. He had been on a social visit Thursday evening, he said, when he received a phone call from an unrecognised number advising him to "come home now".

"I opened the letter in front of him because I knew it was something serious," he said. "This was a complete bolt from the blue. I had no inclination that anything of this sort was coming."

Free-press advocates expressed anger at the news, saying that it reinforced Pakistan's reputation as one of the most inhospitable countries for journalists.

"The expulsion of Declan Walsh shows just how much the authorities fear independent media coverage," Bob Dietz, the Asia programme coordinator of the Committee to Protect Journalists, said in a statement.

Prakash M Swamy In New York
© Copyright 2021 PTI. All rights reserved. Republication or redistribution of PTI content, including by framing or similar means, is expressly prohibited without the prior written consent.