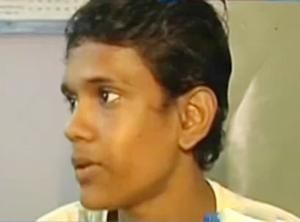 The government has set the ball rolling for repatriating a 15-year-old Pakistani boy, stuck for more than two years in a story resembling that of Geeta, the hearing and speech impaired girl who returned home from the neighbouring country last week after over a decade-long separation from her family.

“Ministry of External Affairs Director Sugandh Rajaram contacted me over phone two days ago and asked about Mohammad Ramzan, who hails from Karachi and had got separated from his mother some five years ago.

“He (Rajaram) asked me to send a petition to facilitate the return of Ramzan,” Archana Sahay, who is taking care of the Pakistani boy since October 2013, on Monday.

She is running an NGO ‘Aarambh’ in whose shelter hom. Umeed, Ramzan is staying.

“I have come to know that Rajaram will take up the issue with his Pakistan counterpart shortly to facilitate Ramzan’s return,” she said.

“A fortnight ago, I contacted (MEA) with the help of their website but it turned down my plea. But now with Geeta’s return, they seem to have become active on Ramzan’s issue,” she added.

“Ramzan’s ordeal started when his father Mohammad Kazol divorced his mother Begum Razia in 2009. Kazol along  with his son and daughter Zora started living separately. Razia twice or thrice contacted Kazol to get back her children.

“A deal was struck between Kazol and Razia under which she got Zora,” said Hamza Basit, a local, who had come to the rescue of the runaway lad after learning about his ordeal from a newspaper report last month.

He said Ramzan had told him that he along with his father had moved to Bangladesh in 2009 or 2010.

“Kazol remarried a woman in Bangladesh to compound problems for Ramzan, Basit said. His step mother started ill- treating Ramzan. His father too did him no good.

Asked about the boy, the MEA spokesperson had on Friday said in New Delhi that there were some issues with the nationality of the boy. Once Pakistan verifies his nationality, the decks would be cleared for his return to that country, he had added.

So, about 30 months back, Ramzan sneaked into India after someone advised him to do so, 20-year-old Basit, who is pursuing a chartered accountancy course here, said.

The run-away boy landed in Ranchi and after wandering in Mumbai, and New Delhi reached Bhopal station where the police caught him and handed him over to Umeed, he said.

Activists in Karachi, Pakistan also helped Basit in his mission, by displaying Ramzan’s photos on the walls of Moosa colony after his appeal went viral. One day, the boy’s step-father in Pakistan saw the poster and passed on the information to his wife -- the boy’s mother, Basit said.

A delighted Razia contacted her son from Pakistan over phone in Bhopal on September 18 with the help of a person in whose house she worked, he added.

Ramzan said, “I couldn’t believe my ears when my mother talked to me after five years. I also spoke to my sister Zora and my friends in Moosa Colony. Since then, I am talking to my mother frequently,” he added.

Ramzan’s story is similar to Geeta, who was reportedly just 7 or 8 years old when she was found sitting alone on the Samjhauta Express by the Pakistan Rangers 15 years ago at the Lahore railway station.

She was adopted by the Edhi Foundation’s Bilquis Edhi and lived with her in Karachi. She returned to India on October 26 but was unable to recognise her family.

Right now, Geeta is staying in an institute for speech and hearing impaired people in Madhya Pradesh’s Indore district.

Lemuel Lall
© Copyright 2022 PTI. All rights reserved. Republication or redistribution of PTI content, including by framing or similar means, is expressly prohibited without the prior written consent.