The Pakistani military had roped in several top militant leaders, including one currently in jail, to negotiate with terrorists who had held dozens of hostages after an attack on the army headquarters last week, a media report said on Friday.

The leaders of banned militant groups were flown to the garrison city of Rawalpindi on special flights from Lahore, Bahawalpur and Rahimyar Khan,shortly after the terrorists took over the building following a failed attempt to storm the general headquarters on October 10.

Among the militant leaders who were brought in to negotiate with the terrorists were Malik Ishaq, a jailed leader of the Sipah-e-Sahaba, Mufti Abdul Rauf, the brother of Jaish-e-Mohammed leader Masood Azhar, Sipah-e-Sahaba chief Mohammad Ahmad Ludhianvi and Fazlur Rehman Khalil of the Jamiat-ul-Ansar, The News daily quoted its sources as saying.

Chief military spokesman Major General Athar Abbas has acknowledged that the terrorists had given a list of over 100 arrested militants from different groups whom they wanted freed in exchange for the hostages.

Abbas had earlier said the military did not negotiate with the terrorists.

The News reported that terrorists had also threatened to kill the hostages and 'expressed their desire to hold talks' with army chief General Ashfaq Parvez Kayani.

The militant leaders were roped in for negotiations as a tactic to buy time with the terrorists, the paper quoted its sources as saying.

Though Sipah-e-Sahaba leaders Malik Ishaq and Mohammad Ahmad Ludhianvi were brought in because of their links to the Taliban, they told military authorities that they had 'no prior acquaintance' with the attackers.

The terrorists had threatened to kill the hostages in batches of 10 every hour if their demands were not accepted by the authorities, sources said. The negotiators asked the terrorists to wait till the morning of October 11 for the release of arrested militants.

Commandos launched an operation to free the hostages at 6 am on October 11. Fifteen security personnel and civilian employees of the military died in the assault. Nine terrorists were killed while the alleged mastermind of the attack, a former soldier named Mohammad Aqeel alias Dr Usman, was captured after being injured. 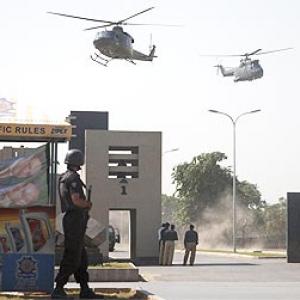