GPS-fitted drones capable of lifting up to 10 kg flew in from Pakistan seven to eight times to airdrop the cache of arms, ammunition and fake currency seized in Punjab's Tarn Taran district, a police probe revealed on Wednesday. IMAGE: The counter intelligence wing of the Punjab police escort the alleged members of the Khalistan Zindabad Force -- arrested after the seizure of AK-47 rifles, pistols, satellite phones and grenades in their possession -- to a local court in Amritsar, on September 23, 2019. Photograph: PTI Photo.

In the first such incident reported in Punjab, drones were used to drop weapons and communication devices, among others, from across the border, an official said, adding that a half-burnt drone used in the operation was recovered from Tarn Taran.

The Punjab police on Sunday claimed to have busted a terror module of the Khalistan Zindabad Force, backed by a group based in Pakistan and Germany. It said the terror group was conspiring to unleash a series of strikes in Punjab and adjoining states.

During questioning, the accused told investigators that GPS-fitted "big" drones were used to drop arms and ammunition from across the border in Tarn Taran district, an official of the counter-intelligence wing of the Punjab police said on Wednesday.

"Drones were sent from across the border for seven to eight times to deliver arms and ammunition," the official said, adding that consignment of weapons was delivered this month.

One drone can lift up to 10 kg of weight, he added.

Though investigations are underway, it is believed that the weapons meant were to be used to spread terror in Jammu and Kashmir.

Punjab Chief Minister Amarinder Singh on Tuesday described the use of drones for delivery of weapons as "a new and serious dimension on Pakistan's sinister designs" after the abrogation of the special status for Jammu and Kashmir.

Meanwhile, the police recovered a half-burnt drone from the godown of a rice shelling unit located in Chabhal area on Bhikhiwind road in Tarn Taran.

It was recovered based on information received from the accused during questioning, a police official told PTI on the condition of anonymity.

"The accused said the drone was burnt as it failed to return to Pakistan after dropping off the first consignment of weapons in village Bhuse (in Tarn Taran)," the official said.

After it crashed, operators of the drone in Pakistan sent the location of the crash to the accused, who recovered it and later burnt it, the police official said.

The police, along with a forensic team, recovered some parts, including a GPS antenna, of the drone on Tuesday.

"Some parts of the drone have been disposed of in a canal located near Gurdwara Baba Budha Sahib," the police official said, adding that divers will be deployed to recover those.

The Punjab police's investigation revealed that the Pakistan-based chief of the KZF, Ranjeet Singh alias Neeta, and his Germany-based associate Gurmeet Singh alias Bagga, were involved in the delivery of weapons from across the border and with the help of local sleeper cells, they radicalised and recruited local members to foment trouble.

The Punjab government has already decided to hand over the investigation to the National Investigation Agency. 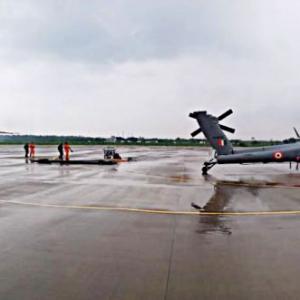