Clinton said her Pakistani Foreign Minister Hina Rabbani Khar, during a telephone talk, 'informed me that the ground supply lines into Afghanistan are opening'.

Islamabad had long demanded that US must apologise for the air raid that killed 24 Pakistani army personnel before it would re-open the supply routes to Afghanistan.

"Foreign Minister Khar and I acknowledged the mistakes that resulted in the loss of Pakistani military lives," Clinton said in a statement.

"We are sorry for the losses suffered by the Pakistani military. We are committed to working closely with Pakistan and Afghanistan to prevent this from ever happening again," Clinton said.

"Pakistan will continue not to charge any transit fee in the larger interest of peace and security in Afghanistan and the region. This is a tangible demonstration of Pakistan's support for a secure, peaceful, and prosperous Afghanistan and our shared objectives in the region."

Clinton's announcement came as Pakistan's highest decision-making body on security issues was holding a crucial meeting on Tuesday that is expected to ratify new terms of engagement with the US and the reopening of NATO supply routes to Afghanistan.

The meeting of the Defence Committee of the Cabinet is being chaired by new Prime Minister Raja Pervez Ashraf. It is being attended by key ministers, including Foreign Minister Hina Rabbani Khar, Army Chief General Ashfaq Parvez Kayani, other service chiefs and ISI chief Lt Gen Zahir-ul-Islam, officials said.

Sources in Islamabad said the two sides are expected to issue a joint statement on the NATO attack and the need for greater cooperation to avert such incidents as the US is unlikely to offer an outright apology when the Obama administration is gearing up for the next general election.

The statement, meant to satisfy the Pakistani demand for an apology, has been 'carefully worded in a manner that satisfies the concern of both sides', the Dawn newspaper reported on.

Details of the arrangement for reopening the NATO supply lines were reportedly stitched together by Gen Kayani and Gen John Allen, commander of the International Security Assistance Force in Afghanistan, who has visited Islamabad twice in less than a week.

On Tuesday, a US delegation led by Deputy Secretary of State Thomas Nides and including Allen held talks on the NATO supply lines and the situation in Afghanistan with a Pakistani team led by Khar. 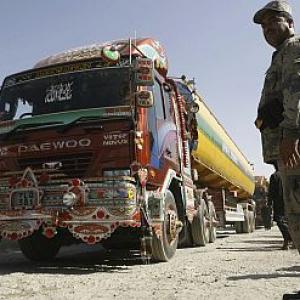