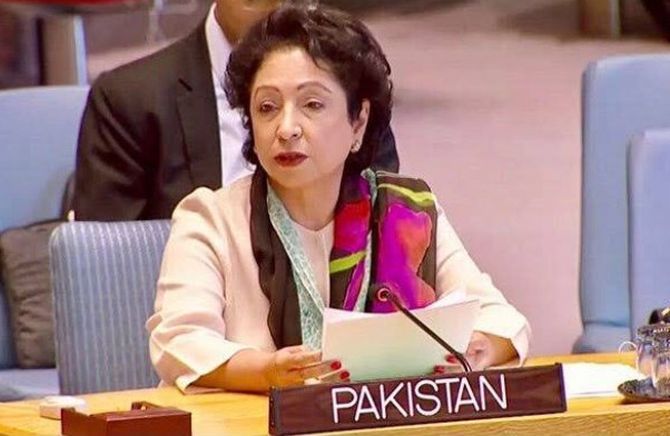 Prime Minister Imran Khan in a surprise move has appointed Munir Akram, known for his strident anti-India stand, as Pakistan's new permanent representative to the United Nations, replacing Maleeha Lodhi, a day after he returned from the United States.

The Pakistan Foreign Office gave no reason for Lodhi's removal in a statement late on Monday.

The development came a day after Prime Minister Khan returned from New York, where he raised the Kashmir issue in his maiden address to the UN General Assembly last week.

"Ambassador Munir Akram has been appointed as the Permanent Representative of Pakistan to the United Nations in New York, in place of Dr Maleeha Lodhi," the Foreign Office said.

The development is seen as surprising since many including government ministers praised Lodhi and her team for 'successfully managing' Khan's visit to New York, The Express Tribune reported.

The appointment of Akram, who previously served as Pakistan's Ambassador to the UN, also indicates that Pakistan is going to launch a diplomatic offensive on Kashmir and against India," it said.

Akram, 74, is a veteran diplomat and is one of the ambassadors who believe in hardcore approach towards India instead of appeasement, the newspaper commented.

Reacting to the development, Lodhi, a former journalist, said it has been an honour to serve the country for over four years.

'Representing Pakistan at the world's most important multilateral forum was a great privilege. I had planned to move on after UNGA following a successful visit by the PM,' Lodhi said in a tweet.

In his speech, Khan devoted half of his address to the Kashmir issue, warning that if there's face-off between two nuclear-armed neighbours, the consequences would be far beyond their borders.

Pakistan has been trying to internationalise the Kashmir issue after India withdrew the special status of Jammu and Kashmir on August 5, but New Delhi has asserted the abrogation of Article 370 was its 'internal matter'.

Akram served as the Permanent Representative of Pakistan to the UN from 2002 to 2008.

He was dismissed by the then president Asif Ali Zardari over his disagreement in presenting the case of assassination of Benazir Bhutto to the United Nations.

Bhutto, who was assassinated in 2007, was Zardari's wife.

Akram had also courted controversy after he was accused of domestic violence by his partner Marijana Mihic in December 2002 while serving as Pakistan's ambassador to the UN.

The case was reportedly settled out of the court and he was not charged with the crime due to his diplomatic immunity.

Akram specialises in multilateral diplomacy with considerable experience over the years at the UN's New York and Geneva chapters. He studied at the Karachi University and graduated with a Masters degree in Political Science and a Bachelors in Law, the statement said.

Among other transfers approved by the prime minister include appointment of Khalil Ahmad Hashmi, presently serving as Director General (UN) at Ministry of Foreign Affairs (MoFA), as Permanent Representative of Pakistan to the UN in Geneva.

According to Pakistani media reports, Science and Technology (S&T) Minister Fawad Chaudhry may have to relinquish his portfolio once again.

Zubaida Jalal is likely to become education minister, with Firdous Ashiq Awan also among those who will be part of the reshuffle.