News
Business
Movies
Sports
Cricket
Get Ahead
Money Tips
Shopping
Sign in  |  Create a Rediffmail account
Rediff.com  » News » Pak must crack down on terrorists for dialogue with India: WH

Pak must crack down on terrorists for dialogue with India: WH

United States President Donald Trump is encouraging a cooling of tension between India and Pakistan, the White House said on Friday, pointing out that successful dialogue between the two nations would be possible if Pakistan cracks down on terrorists and extremists on its territory. "I think what you'll hear from the President is very much encouraging a reduction in tensions between India and Pakistan, encouraging the two countries to engage in bilateral dialogue with each other to resolve their differences," a senior administration official said, when asked whether Trump would offer to mediate on the Kashmir issue again during his upcoming Indian visit.

Trump and First Lady Melania Trump will lead a 12-member American delegation to Ahmedabad, Agra and New Delhi on February 24 and 25.

"We continue to believe a core foundation of any successful dialogue between the two (Indian and Pakistan) is based on continued momentum in Pakistan's efforts to crack down on terrorists and extremists on its territory. So we continue to look for that," the official said.

"But I think the president will urge both countries to seek to maintain peace and stability along the Line of Control and refrain from actions or statements that could increase tensions in the region," said the official who spoke to reporters on condition of anonymity.

Responding to a question on the Afghanistan peace process, the official said the United States would just encourage India, as it does with regional countries, to do whatever it can to support this peace process so that it can be successful and can potentially end 19 years of military, diplomatic, economic engagement.

"You know, that we can end the military engagement. We will be continuing our diplomatic and economic engagement, which has been there over the last 19 years. But we certainly would look to India to support this peace process -- an important country in the region, important to the overall stability of the region. So I think if the issue comes up, that is what would be the request from the president," the official said. 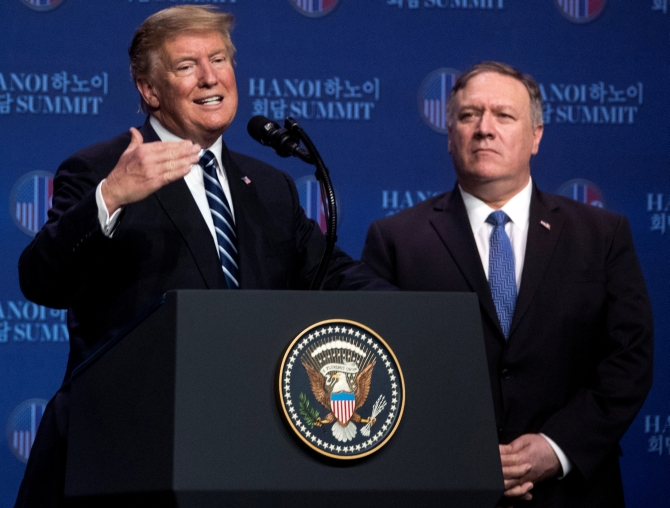