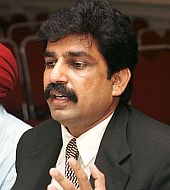 Pakistan's Minority Affairs Minister Shahbaz Bhatti, a vocal critic of the controversial blasphemy law, was on Wednesday shot dead by gunmen who ambushed his car near his residence in Islamabad, the second high-profile politician to be assassinated in nearly two months.

Bhatti, the only Christian minister in the Cabinet, was attacked shortly after he left his residence in Sector I-8 at about 11.20 am local time.

TV news channels reported that Bhatti, who had been receiving threats to his life since last year, was accompanied only by his driver and an unidentified woman and had no security guards.

A witness told Geo News channel that the gunmen stopped Bhatti's car and ordered his driver Gul Sher and the unidentified woman to get out of the car and then fired at the minister.

Another witness said the firing continued for about 20 seconds. At least two gunmen fired at Bhatti while two more sat in a car, witnesses said.

Bhatti was rushed to Shifa International Hospital, where he succumbed to his injuries.

The attack followed the January 4 assassination of outspoken Punjab Governor Salmaan Taseer, who was killed by his extremist bodyguard who was angered by his opposition to the blasphemy law.

Hospital spokesman Azmatullah Qureshi said that Bhatti was hit by several bullets. The gunmen threw several pamphlets in Urdu at the site of the attack that linked the attack on Bhatti to his opposition to the controversial blasphemy law.

The pamphlets, issued by 'Tanzim Al Qaida Tehrik Taliban Punjab', said any one who insulted Prophet Mohammed would be given the death sentence.

The pamphlet also said any sort of blasphemy or change in the blasphemy law would not be tolerated.

Bhatti had told the media several times that he had received death threats after opposing the blasphemy law and speaking in support of Asia Bibi, a Christian woman sentenced to death last year for allegedly insulting Prophet Mohammed.