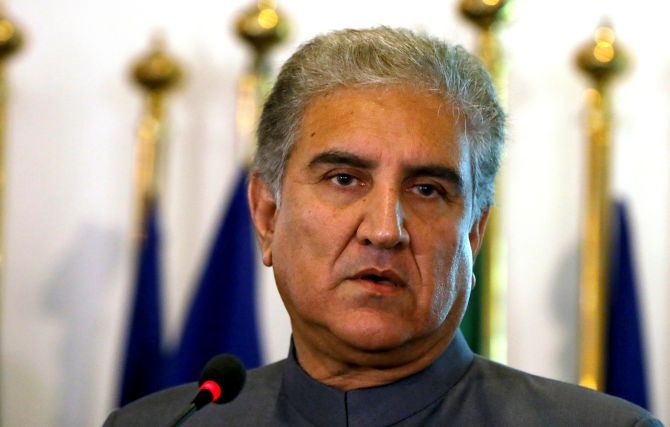 Amidst reports of growing press censorship in Pakistan, Foreign Minister Shah Mehmood Qureshi was heckled by a Canadian journalist in London alleging that his social media account was suspended over complaints from the government, according to media reports.

The move came as the Pakistan government decided to curtail the space given by the press to jailed politicians like Pakistan's former prime minister Nawaz Sharif and Zardari.

Journalist Ezra Levant of the Rebel media, a Canadian far-right political website, interrupted and verbally assaulted the minister alleging that his Twitter account was suspended over complaints from the Pakistan government, the Dawn newspaper reported.

'That's exactly what I'm talking about. Twitter didn't delete my whole account. But they deleted a tweet they said violated Pakistani law. Twitter said that to me in an email. I'm in Canada. Twitter is in America. But Pakistan censored us,' he tweeted.

In a video clip of the incident shared by Pakistan journalist Munizae Jahangir on Twitter, Levant said the organisers should be embarrassed to invite a 'censorious thug' to talk about free speech.

Responding to the allegations, Qureshi said, "First of all you want your sentiments to be respected. Just look at the tone to the panel you have adopted. Is that the correct way? You have a right to ask questions."

"You have double standards what you call freedom; at times you are projecting certain agendas," the minister said.

Replying to a question on Pemra's recent decision to take three television channels off air, the arrest of journalists and deepening concerns about censorship, Qureshi said there was 'no question of gagging' journalists.

"Believe you me, there is no question of gagging or controlling media," he told the conference co-hosted by Britain and Canada.

"That time has gone and with the new social media, the advent of social media, even if you want to gag you can gag nothing," he said.

Further explaining, Qureshi said that three news channels were taken off and 'I'm told for 6-8 hours, and now they are functioning again'.

He said the channels had 'issues' with the regulatory body and 'those issues have been settled'.

Qureshi was also asked about an interview of Zardari, which was also abruptly taken off air.

Pemra had on July 1 taken off air an interview of the former president which was being conducted on the premises of the Parliament House, where Zardari came to attend a national assembly session after the speaker issued his production order.

Qureshi said Zardari, who is currently facing corruption charges, was not permitted to be interviewed in the way he was, 'otherwise he can say what he wants to'.

The media curbs imposed by Pemra has been criticised by a media watchdog.

"This is an absolutely unacceptable violation of the principles of media pluralism and independence during a revelation that was clearly in the Pakistani public interest," said Daniel Bastard, head of Reporters Without Borders' Asia-Pacific desk, in a statement on Tuesday.

"We call on Prime Minister Imran Khan's civilian government to take immediate steps to ensure that cable transmission of the three TV channels is restored. The recent surge in sudden acts of media censorship is exposing the current regime's increasingly dictatorial nature," he said.