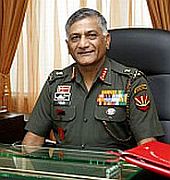 Describing Pakistan and China as 'two major irritants' for India's security, Army chief Gen V K Singh on Friday said the armed forces should ensure the country has a 'substantial' conventional war capability to fight in a nuclear scenario.

"We have two major irritants. One, there is a problem of governance in Pakistan where terror outfits receive support and where internal situation is not very good. And, therefore, it can have a fallout in terms of how these things impact India.

"Till the time the terrorist infrastructure remains intact on the other side, we have something to worry," he said inaugurating a seminar on 'Indian Army: Emerging Roles and Tasks' in New Delhi.

He also referred to the threat posed by China which was rising both economically and militarily.

"Although we have a very stable border, yet we have a border dispute. And, therefore, the intentions need to be looked at along with this additional capability that is coming out," he said.

The army chief said, "It impacts the way we will task our army and the role that we will give to it so that it can do the task that the nation wants. So, with this, lets also see what are some of the threats that we face or the challenges that we have."

He said, "Even though we have a stable border with China, we cannot take chances."

He told the seminar organised by Centre for Land Warfare Studies, an army-sponsored think tank, that an all-out conventional war with China was "not not certain", but skirmishes were "certainly possible."

"We must have a substantial conventional war-fighting capabilities with the ability to fight in a nuclear scenario," he stressed.

Noting that India had no "extra-territorial ambitions," the Army Chief said India needed to be watchful of China's intentions in building up its military infrastructure.

Singh's remarks come close on the heels of Defence Minister A K Antony stating that China was exhibiting 'assertiveness' in its military posturing in the region and asked the armed forces to remain vigilant to counter any threat.

Listing the future threats to India's national security, Singh said the island territories were vulnerable and these needed to be defended well.

He also talked about the coastal assets, both military and infrastructural, that were critical for the country's development and said securing them too was of primary importance.

In this regard, he noted that India's peninsular projection into the Indian Ocean had provided a gateway for attacks and the country's subjugation in the past.

Though the army chief did not name the Maoists, Singh said 'internal dissent' and insurgencies in Jammu and Kashmir and the North East were the other threats that needed attention.

He also cautioned about the challenges posed by nuclear proliferation in India's neighbourhood, but did not name any country in this regard.

He also warned about the dangers posed by 'weaker nations' in India's neighbourhood resorting to 'asymmetric warfare' against larger and more powerful countries to destabilise their growth.

Singh said India's role in assisting the global community in addressing its concerns had increased in recent times, particularly its contribution to the United Nations peace-keeping missions.

Talking about modernisation of the armed forces, Singh said India's defence infrastructure was complementary to its economic development and attaining primacy in the new world order.

He said the armed forces' role in India was to contribute to and ensure its 'independence, strategic role, autonomy and deterrence.'