Pak's attempt to involve UN in J-K has not 'borne fruit': India

Pakistan's attempts to involve the United Nations in the context of Jammu and Kashmir have not "borne fruit" and has been strongly refuted by India at every turn, said TS Tirumurti, India's Permanent Representative to the United Nations. 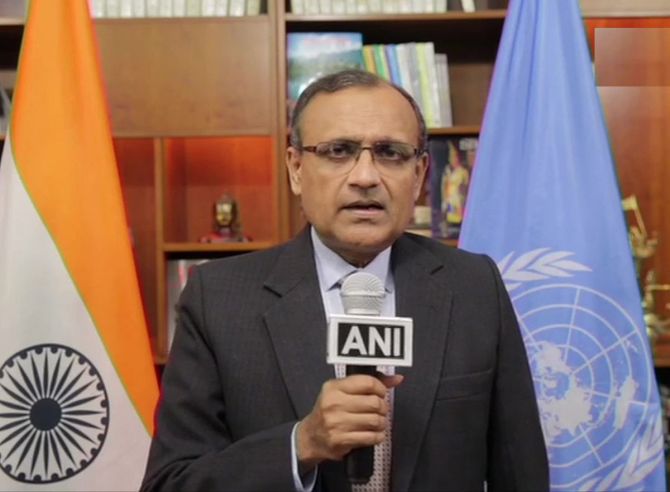 TS Tirumurti on Monday said that Pakistan's efforts to rake up Kashmir issue internationally fell flat as no formal meeting of the Security Council on the India-Pakistan issue has taken place since November 1965 and in closed-door meetings, recently held every country, except China, underlined that fact that Kashmir is the bilateral issue between New Delhi and Islamabad.

"Attempts by Pakistan to try and internationalise what is essentially a bilateral issue are nothing new. Contrary to what the foreign minister of Pakistan has asserted. There has been no formal meeting of the Security Council on the India-Pakistan issue since November 1965. What came up recently was in a closed-door and completely informally meeting. Under what is called, any other business, which is not even a recorded discussion," he said.

"There was no outcome in the meeting but what is interesting is that in the Security Council. Practically every country, except for China, underlined the fact that this was a bilateral issue to be dealt with bilaterally between India and Pakistan. Therefore Pakistan's attempt fell flat," he added.

"I want to reassure you that the attempt by Pakistan to involve the United Nations in the context of Jammu and Kashmir, has not borne fruit and has been strongly refuted by India at every turn. We will continue to counter their moves in the future as well," he further said.

Last month, Pakistan foreign minister Shah Mahmood Qureshi raised the issue Jammu and Kashmir in his address to the high-level segment of UN ECOSOC titled 'Multilateralism after COVID 19:what kind of UN do we need at the 75th anniversary?'

Islamabad has been unsuccessfully trying to drum up international support against India on the matter.

India has categorically told the international community that the scrapping of Article 370 of the Constitution was its internal matter.