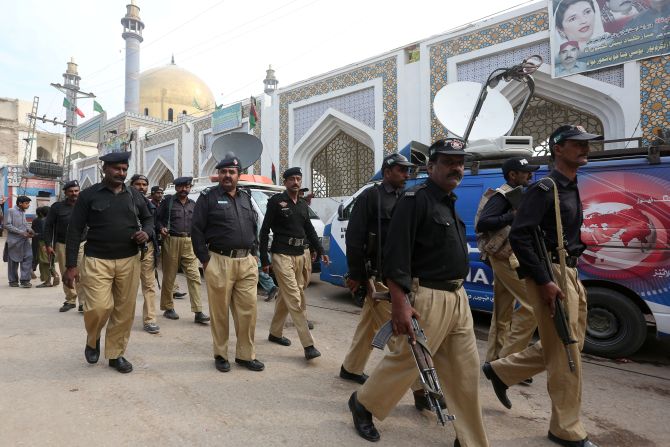 More than 130 suspected terrorists have been killed and over 350 people, mostly Afghans, arrested in Pakistan as part of a nationwide crackdown by security forces following a string of suicide bombings in the country.

At least 15 terrorists were killed in another targeted strike by the Pakistani forces across the Afghan border on Sunday, Geo News reported.

A high-value target, known for recruiting terrorists and training suicide bombers, was also reportedly gunned down and at least 12 terror sanctuaries, including a hideout and weapon depot camp of Jamaat-ul-Ahrar’s commander were also pounded.

In Pakistan's northwest tribal region, at least 11 Afghan terrorists were killed during a gun battle with the security forces. The gun-battle occurred in Sapperkot and Para Chamkani in Kurram Agency.

Pakistan had reportedly launched ‘strikes’ against militant bases in Afghanistan on Saturday.

The killing of militants and arrests were part of a nationwide crackdown following a spurt in terror attacks.

Punjab police spokesman Niyab Haider said, “More than 350 suspects have been taken into custody (in Punjab), mostly Afghans, since the Lahore blast last Monday on the Mall Road.”

“During Saturday and Sunday the police have arrested more than 200 people mostly Afghans and Pashtoon as they did not have identification papers. Police have also arrested those who had given them their houses on rent,” he said.

According to a spokesman of the Crime Investigation Department, “Police are focusing on intelligence-based search operations to get maximum results. Deployment at all sensitive government installations has been increased and the operation in and around localities of shrines in the province is also being conducted.”

He said illegal weapons have also been recovered from some of the suspects who have been shifted to undisclosed location for identification.

Police have also taken a man into custody who had rented his house to handler Anwarul Haq of the Lahore blast.

According to Punjab Chief Minister Shahbaz Sharif, Haq had brought the Afghan suicide bomber to the Mall Road.

An anti-terrorism court on Saturday handed over Haq to Counter Terrorism Department on a 30-day remand. Tahrik-i-Taliban Pakistan splinter group Jamaat-ul-Ahrar had claimed the responsibility for the Lahore blast.

Meanwhile, an imminent attack on a shrine in Multan was thwarted with the killing of five terrorists, police said. The terrorists belonged to Jamaat-ul-Ahrar group.

The army by Friday had killed more than 100 suspected terrorists.

Senior police officers were among 13 people killed when a Taliban suicide bomber blew himself up during a protest rally outside Pakistan's Punjab assembly in Lahore last Monday.

On Wednesday, at least seven people were killed and several others, including judges, injured in two separate suicide attacks in Pakistan’s restive northwest region.

One of the deadliest suicide bombings in Pakistan in recent times struck Thursday night at the Lal Shahbaz Qalandar shrine in Sehwan area of southern Sindh province where at least 88 people were killed and over 200 injured in an attack claimed by the Islamic State.