A three-judge bench of justices Altamas Kabir, S S Nijjar and J Chelameswar temporarily halted the Commission from probing Chavan's poll account on his appeal against a Delhi high court order, which had allowed the probe.

While staying the EC probe, the apex court bench also issued notices to the poll panel, the Maharashtra unit of the Bharatiya Janata Party and other complainants including BJP leaders Mukhtar Abbas Naqvi and Kirit Somaiyya on whose plea the probe had been launched. The bench sought replies to its notices within two weeks and posted the matter for further hearing on December 2.

The high court on September 30 had given the poll panel its green signal to go ahead with the probe into Chavan's poll account on the complaints of also former state minister Madhav Kinhalkar, who was defeated by Chavan from the Nanded assembly constituency.

The EC had begun proceedings against Chavan on April 2 on the complaints, which alleged that he had shown to the commission a poll expenditure of merely Rs 11,000 despite paying money to various newspapers for favourable coverage of his election campaign.

Chavan had challenged the EC probe against him saying that the commission had no power to probe his account, but the high court had said the poll panel was well within its right to probe it. Fed up with KCR, Telangana activists to form anti-TRS party
Probe in Adarsh scam has slowed down: Chavan 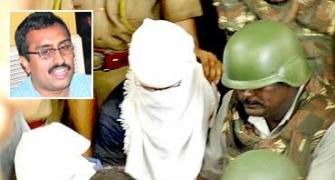 'Hinduism and terrorism cannot go together'