The 2G controversy rocked Parliament's Public Accounts Committee meeting in New Delhi on Monday with opposition parties demanding that former director general (Audit) R P Singh be summoned and asked why he differs with the Comptroller and Auditor General on the quantum of loss.

With differences persisting, the meeting was adjourned. The meeting scheduled for Tuesday has also been postponed reportedly as Chhath festival falls on that day.

Sources said BJP and other opposition parties insisted that Singh should be summoned as he has differed with the figures of loss incurred by the government in the 2G scam. Singh, who has now retired, has stated that the loss is merely of Rs 6,000 crore while the CAG had maintained that it was to the tune of Rs 1.76 lakh crore.

BJP leader Prakash Javadekar demanded that not only Singh but others like Telecom Minister Kapil Sibal -- who said there was zero loss -- among others, should be summoned by the PAC and asked how they had arrived at figures different from that of the CAG.

AIADMK member M Thambidurai insisted that the Central Bureau of Investigation's director should also be called as the agency had arrived at a different loss figure.

BJP, Biju Janata Dal, Shiromani Akali Dal  and AIADMK referred to the letter written by Congress member Sanjay Nirupam, asking that the 2G issue be discussed, and said the questions which have not been addressed should be taken up.

Caught in a bind over Nirupam's letter, Congress members today argued that Singh cannot be asked to present his views in front of the CAG and his team -- which is present in every PAC meeting -- as he does not concur with them.

Some Congress members in the PAC were later heard saying that Nirupam had caused an unnecessary hassle by writing this letter. The matter is now with the JPC and the PAC could have avoided getting into the issue afresh, they felt.

The Opposition members demanded that since Singh has retired, he has nothing to fear and so can freely depose before the PAC. One member even maintained that there have been several instances when those summoned by the committee have differed with the CAG.

With no consensus in sight, PAC Chairperson Murli Manohar Joshi adjourned the meeting on the ground that the legal and Constitutional aspects related to the issues raised by the members today will be looked into and then brought up for discussion at a later meeting.

R P Singh, who had come prepared to attend the meeting and make his presentation, was not called in today. 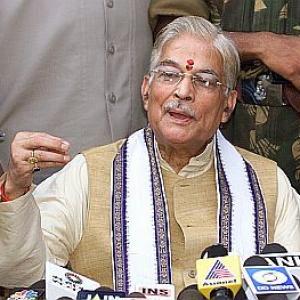