Twenty-five of Sir Ganga Ram Hospital's "sickest" COVID-19 patients died in 24 hours and the lives of 60 more hung in precarious balance, officials said on Friday as the scramble for oxygen got more increasingly more frantic in hospitals across the national capital. Sources said “low pressure oxygen” could be the likely cause of the deaths in Ganga Ram, one of the city's biggest and most high-profile hospitals, where healthcare staff was reduced to manually ventilating patients in its ICU and emergency department. The hospital announced the deaths shortly after 8 am.

After the unprecedented crisis of the morning, an oxygen tanker did reach Ganga Ram in central Delhi at 9.20 am but it was enough to last up to about five hours depending on consumption, an official at Ganga Ram said.

As hospitals big and small counted in hours and sometimes minutes how much oxygen supply they had left, changing the timeframe depending on the erratic supply, Delhi Chief Minister Arvind Kejriwal made an impassioned appeal to Prime Minister Narendra Modi to ensure the supply of oxygen to the city.

“I request with folded hands… that the prime minister gives direction to chief ministers to ensure the smooth movement of oxygen tankers coming to Delhi,” Kejriwal said at the COVID meet being chaired by Modi.

People, he added, were in major pain due to the oxygen shortage. The Centre should take over all oxygen plants through the Army and every truck should be accompanied by an Army escort vehicle, he suggested.

SGRH Chairman Dr D S Rana verbalised the demand of all hospitals, struggling to replenish their oxygen stocks for the last four days in the face of the explosion in the number of COVID-19 cases.

"All we need is uninterrupted and timely supply of oxygen,” the Ganga Ram head said.

More than 500 coronavirus patients, including around 150 on high flow oxygen support, are admitted in his hospital.

"Ventilators and BiPAP machines are not working effectively. Lives of another 60 'sickest' patients at risk. Major crisis likely," a senior official at the hospital said.

The oxygen emergency was mirrored at the Max Hospitals as well.

Though no deaths were reported, Max Healthcare sent out an SOS on Twitter at 7.43 am, saying that Max Smart and Max Hospital Saket had less than an hour of oxygen left for the about 700 patients admitted.

“Awaiting promised fresh supplies from INOX since 1 am… over 700 patients admitted, need immediate assistance,” it said, tagging the Prime Minister's Office, the Union Health Minister and Kejriwal among others.

About two hours later, at 9.35 am, it put out an update that it had received emergency supplies that would last another two hours and was waiting for more.

Outside the hospitals, too, despair escalated. Ambulances could be seen lined up, patients waited on stretchers, some visibly gasping for breath, and family members and friends desperately tried to get their loved ones a bed. But that was a tough task.

On Thursday, Delhi recorded 306 COVID-19 deaths and 26,169 cases with a positivity rate of 36.24 per cent, the highest since the pandemic began a year ago. City hospitals grappled with depleting oxygen supply and, stretched to their limits, some requested the Delhi government to transfer patients to other healthcare facilities.

While some hospitals have managed to make short-term arrangements, there is no immediate end to the crisis in sight, a government official had said on Thursday.

On Thursday night, Ganga Ram officials had also sent an SOS to the government saying they had only five hours of oxygen left.

"At 8 pm, oxygen in store is for five hours for peripheral use till 1 am and less for high flow use. Need urgent oxygen supplies," an official had said.

The hospital had received some oxygen around 12.30 am, but the stock had to be supplemented later, the sources said.

As patients and their family members waited outside hospitals, hoping to get a bed, Delhi Health Minister Satyendar Jain on Thursday had said beds would be increased in large numbers once the oxygen crisis was resolved.

Faced with a staff shortage and resource crunch, the All India Institute of Medical Sciences also discontinued contact tracing of exposed healthcare workers and quarantine of asymptomatic contacts.

Only symptomatic healthcare workers (HCWs) will be tested and only those testing positive will be isolated and managed as per the clinical condition.

The decisions were taken at a COVID-19 review meeting held under the chairmanship of AIIMS Director Dr Randeep Guleria on Thursday. 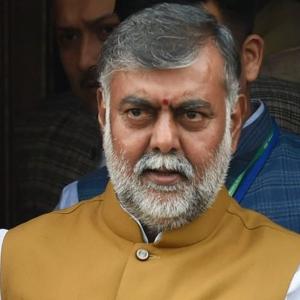