Vaccine major Serum Institute of India on Thursday said the COVID-19 vaccine developed by AstraZeneca and Oxford University is safe and effective, and the Indian trials are progressing smoothly with strict adherence to all protocols. The comments came after AstraZeneca and Oxford University acknowledged a manufacturing error that is raising questions about preliminary results of their experimental COVID-19 vaccine.

A statement describing the error came days after the company and the university described the shots as 'highly effective' and made no mention of why some study participants did not receive as much vaccine in the first of two shots as expected.

Asking people to be patient and not panic, the Serum Institute of India (SII) said in a statement, 'The AstraZeneca-Oxford vaccine is safe and effective. Even the lowest efficacy results are at 60-70 per cent, making it a viable vaccine against the virus.'

That said, varied age groups with different dosage forms will result in slight variations and efficacy.

'We must be patient and not panic,' it added.

'The Indian trials are running smoothly with strict adherence to all the necessary processes and protocols. So far, there are no concerns. However, we are going through the data that is available and will make further statement, if needed,' SII said.

Earlier this week, AstraZeneca said an interim analysis of clinical trials of its COVID-19 vaccine in the United Kingdom and Brazil showed that it was 70 per cent effective on average, becoming the third drugmaker to announce promising results to contain the deadly virus.

'The combined analysis from both dosing regimens resulted in an average efficacy of 70 per cent,' it had said.

Source: PTI  -  Edited By: Utkarsh Mishra© Copyright 2021 PTI. All rights reserved. Republication or redistribution of PTI content, including by framing or similar means, is expressly prohibited without the prior written consent.
Related News: Serum Institute of India, University of Oxford, AstraZeneca, AstraZeneca-Oxford, United Kingdom
SHARE THIS STORY
Print this article 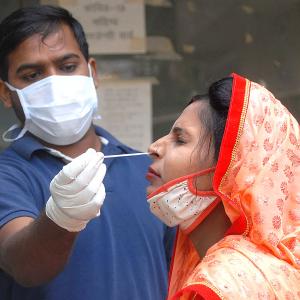