From Oxford to Harvard, voices of support for Jamia, AMU 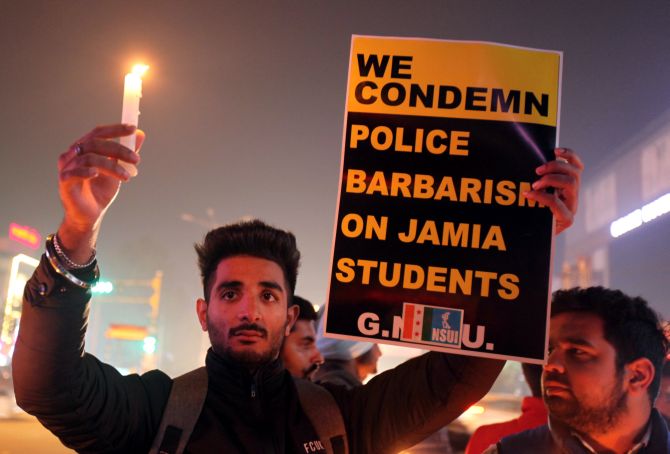 IMAGE: A demonstrator attends a protest against the Citizenship Act and to show solidarity with the students of Jamia Millia Islamia in Amritsar on Tuesday. Photograph: Munish Sharma/Reuters

The ripple effect of protests on campuses across the country reached top educational institutions in the world including Oxford, Harvard, Stanford, Yale and Massachusetts Institute of Technology, where students and scholars staged demonstrations against the police crackdown on students of Jamia Millia Islamia and Aligarh Muslim University.

Over 400 students from different United States universities have issued a joint statement expressing solidarity with Jamia and AMU students lathi-charged by the Delhi Police during protests against the Citizenship (Amendment) Act that turned violent.

In the statement, scholars from universities, including Harvard, Yale, Columbia, Stanford and Tufts said they condemn the 'brutal police violence unleashed against students at Jamia and AMU as a gross violation of human rights under the Constitution of India and international human rights law'.

The students and scholars at Oxford University staged a protest march to India House in London against the Citizenship Amendment Act and the police action on students.

The protests at various universities abroad are mostly being led by Indians studying there.

'We condemn the violence unleashed on students in Jamia and AMU among other Indian institutions. The use of police force against students exercising their fundamental right to protests in the university spaces and elsewhere is direct attack on foundations of a democratic society,' according to a joint statement issued by students, scholars and alumni of University of Oxford.

'We also lend our voices in support of the fight against this immoral and unconstitutional law and call for its immediate withdrawal,' it added.

Similarly, students and scholars at Harvard University have also written an open letter to Indian government saying, 'we are deeply shocked and concerned about reports of police brutality aimed at breaking spirit of protesters especially women. It is important to note that these events are in violation of rights to due process, public association and dissent'.

'Protests are inconvenient and disruptive, but they sustain the secular and democratic fabric of our nation. The violent suppression of protesters by the police, the use of teargas, lathi-charges, and physical assault in response to peaceful dissent, and the police forces' forceful entry into university campuses and consequent Internet blockades there are all deeply reprehensible,' the letter said.

Students and teachers at Columbia University also issued a solidarity statement and have planned a protest march.

'The brutalisation of students and the attack on universities is against the fundamental norms of a democratic society.

'As teachers, students, scholars and members of civil society across the world, we are watching with extreme concern the situation unfolding at Jamia and AMU.

'We refuse to remain silent at the violence unleashed on our colleagues peacefully protesting the imposition of a discriminatory and unjust law,' the statement said.

Similar demonstrations were seen by students at MIT where a silent march was taken out with participants holding posters saying 'Merry Crisis and Happy New Fear'.

A group of students in Finland's Tampere screened the documentary, 'What the fields remember', and wrote letters to Indian embassy to register their protests.

"The documentary is about the Nellie Massacre which happened on a similar pretext without the legal backing. We are also writing letters to the Embassy in Helsinki," Ahalya Ganesh, a gender studies scholar at Tampere University told PTI.

"This (Citizenship Amendment Act and NRC) is leading to a mass genocide and the state is attacking peaceful protesters and civilians alike, with tear gas and gunfire.

"They have cut down phone and internet services to stop the spread of information in five states," she added.

Similar protests have been planned in Berlin and Zurich.

Several protests -- some peaceful, some violent -- erupted across India on Monday against the police crackdown in Jamia Millia Islamia in New Delhi and the controversial citizenship law as students and political leaders took to the streets, even as Prime Minister Narendra Modi called these protests 'deeply distressing' and appealed for peace.