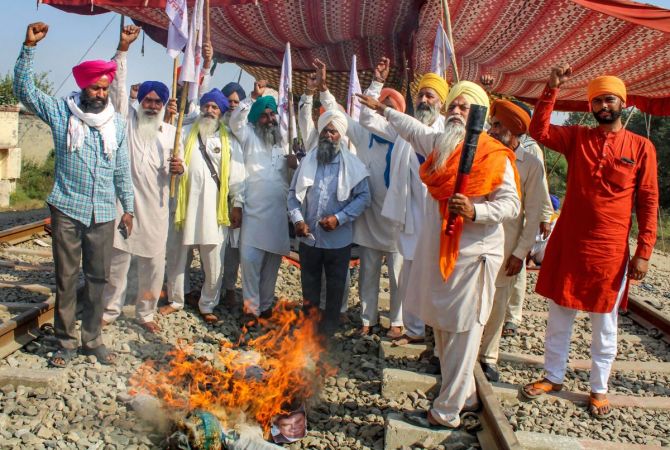 Amid a political furore over the three new farm laws, a Gaon Connection survey has found that more than half of the country's peasantry oppose these, but one-third of them did not know details of the legislations.

Similarly, of the 35 per cent respondents supporting the agri laws, almost 18 per cent were not informed about them.

The survey, "The Indian Farmer's Perception of the New Agri Laws", found that out of the 52 per cent who opposed them 36 per cent did not know the details of the legislations.

The new farm laws promise, among other things, freedom to farmers to sell their produce in the open market.

This face-to-face survey was conducted between October 3 and October 9 across 53 districts in 16 states of the country, according to a statement issued by Gaon Connection.

The survey included 5,022 farmers as respondents.

As per the findings of the survey, released as 'The Rural Report 2: The Indian Farmer's Perception of the New Agri Laws', the biggest fear of these new agri laws among the respondent farmers (57 per cent) is that they will now be forced to sell their crop produce at a lower price in the open market, while 33 per cent farmers fear the government will end the system of minimum support price.

Further, 59 per cent respondent farmers want the MSP system to be made a mandatory law in India. A bigger proportion of marginal and small farmers, who own less than five acres land, support these agri laws in comparison to medium and large farmers.

"Interestingly in spite of slightly more than half (52%) the respondent farmers opposing the three new agri laws (of which 36% were not informed about these laws), almost 44% respondent farmers said the Modi government was 'pro-farmer', whereas about 28% said it was 'anti-farmer'. Further, to another survey question, a majority of farmers (35 per cent) said the Modi government supported the farmers, whereas about 20 per cent said it supported the private corporates/companies," the statement said.

During the last monsoon session of Parliament, three new agri bills were passed, followed by President Ram Nath Kovind giving his asset to them on September 27, which are now the law of the land.

The Farmers' Produce Trade and Commerce (Promotion and Facilitation) Act, 2020, seeks to give freedom to farmers to sell their produce outside of the notified Agricultural Produce Market Committee (APMC) market yards.

The Farmers (Empowerment and Protection) Agreement of Price Assurance and Farm Services Act, 2020, gives farmers the right to enter into a contract with agribusiness firms, processors, wholesalers, exporters, or large retailers for the sale of future farming produce at a pre-agreed price.

The Essential Commodities (Amendment) Act, 2020, is meant to remove commodities like cereals, pulses, oilseeds, onion, and potato from the list of essential commodities and do away with the imposition of stock holding limits.

A section of farmers and farmers' organisations have been protesting against the new farm laws. To document the opinion and perception of the farmers on these new Acts, Gaon Connection carried out this rapid survey with 5,022 respondent farmers spread across all regions of the country.

The survey found that overall 67 per cent farmer respondents were aware of the recent three agricultural laws.

Meanwhile, two-third of farmers were aware about the recent farmers' protest in the country. Awareness about such protests was more among the farmers in north-west region (91 per cent), which includes the states of Punjab, Haryana and Himachal Pradesh. Least awareness was reported in the east region (West Bengal, Odisha, Chhattisgarh) where less than half (46 per cent) were aware about recent farmers' protest.

Overall, 52 per cent farmers reportedly oppose the three new agri laws, whereas 35 per cent support these Acts. Of those who support these laws, almost half (47 per cent) favour them because they believe it will give them freedom to sell their crop anywhere in the country.

Among those who oppose these laws, the highest percentage of respondent farmers (57 per cent) said they did not support the three laws because "farmers will be forced to sell their produce at lower price in open market".