Over 38.5 lakh COVID patients have recovered, highest in world: Govt

Amid a spurt in COVID-19 cases, the government on Tuesday said India learnt from the experience of nations that suffered high mortalities and was able to "distribute the curve" of coronavirus infection due to a "very effective" lockdown and avoid the "huge peak" those countries had in terms of deaths. 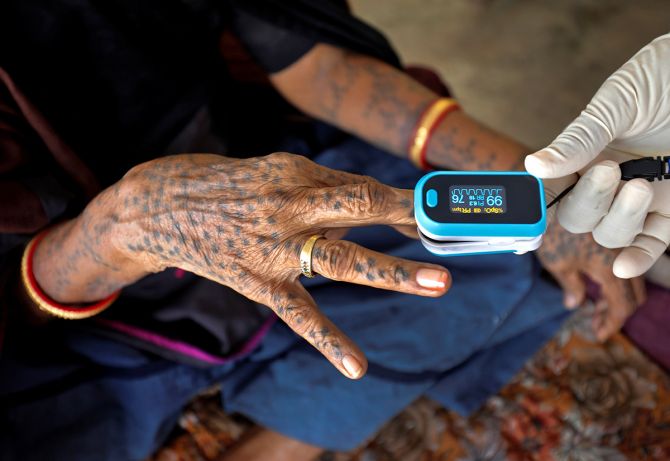 IMAGE: A healthcare worker puts a pulse oximeter on a woman's finger to check her oxygen level during a door-to-door survey for the coronavirus in Moriya village on the outskirts of Ahmedabad. Photograph: Amit Dave/Reuters

Director General of the Indian Council of Medical Research, Dr Balram Bhargava, hailed a very effective lockdown for India not experiencing a "huge peak" as some of the European countries.

At a press conference, Bhargava also said reinfection was "very, very rare" with COVID-19, but it can happen as had been seen in a case in Hong Kong

He, however, said it is not a matter of serious concern.

Talking about India's COVID-19 fight, he said, "If you look at the countries of Europe and the United States, they had a peak and then they came down and during that peak whether it was Spain, the UK or Sweden or Italy, there were huge number of mortalities. Then there was a peak which came down and then they had a second wave which is recently occurring in those countries."

"Fortunately, we took learnings from that in India and we were able to, what we call, 'distribute the curve'. We distributed the curve in such a way that we did not have those large number of deaths and that was attributable scientifically because of a very effective lockdown that was imposed in the months late March, April and May. So, we did not really have a huge peak from that perspective," he said.

Asserting that India has one of the largest number of COVID-19 recoveries, health secretary Rajesh Bhushan said there are 14 states and union territories in the country where the number of active cases are less than 5,000.

Bhushan said there are 18 states and UTs in the country where the total number of active cases are between 5,000 and 50,000, while there are only four states with more than 50,000 active cases.

India's cases per million population is amongst the lowest in the world, which stands at 3,573 while the global average is 3,704, he said.

Bhushan also underlined that India's COVID-19 deaths per million population at 58 is also amongst the lowest in the world and the global average is 118.

Asserting that there has been a progressive rise in India's COVID-19 testing, he said, "We took 27 days to double our testing from 1 crore to 2 crore. However, we took only 10 days to jump from 4 crore tests to 5 crore tests."

Highlighting the high number of recoveries in India, Bhushan said more than 38.5 lakhs patients have recovered and the number was among the highest in the world with Johns Hopkins University data stating that India has the highest recoveries.

Bhushan said that five states -- Maharashtra, Karnataka, Andhra Pradesh, Uttar Pradesh and Tamil Nadu -- account for 60 per cent of the total active cases in the country. 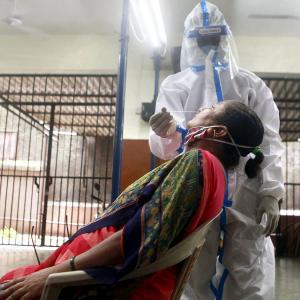