Over 38,000 Ganpati idols immersed in Mumbai 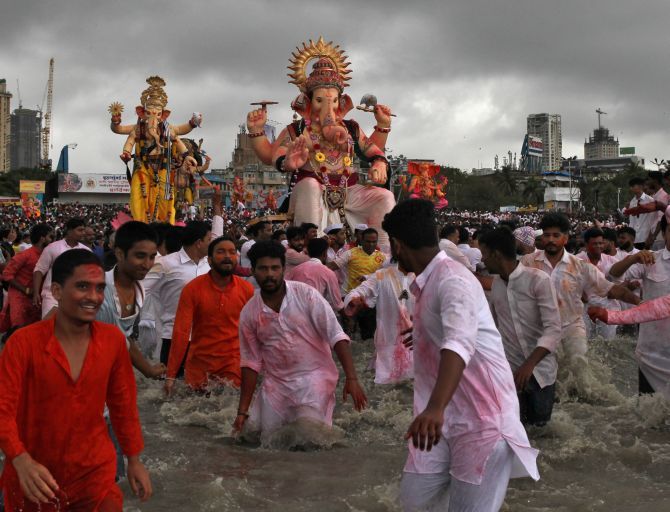 IMAGE: Devotees carry idols of Ganesh for immersion into the Arabian Sea on the last day of the Ganesh Chaturthi festival in Mumbai. Photograph: Prashant Waydande/Reuters

Over 38,000 idols were immersed at 129 designated spots in Mumbai as Ganpati festivities came to an end on Anant Chaturdashi on Thursday, an official said.

Lalbaugcha Raja was immersed in the sea off Girgaum Chowpatty past 9 am on Friday.

The immersions were held in the sea at Girgaum Chowpatty in south Mumbai, Shivaji Park in the central part of Mumbai, Juhu on the western coast, and Aksa, Versova and Marve coasts in the northern part of the metropolis, as well as other water-bodies and artificial ponds.

A statement issued by the Brihanmumbai Municipal Corporation said by 9 am on Friday, 7,627 sarvajanik (public) Ganesha idols were immersed while the figure for small household idols stood at 30,403, taking the total number of immersions over the last 24 hours to over 38,000.

Teams from the civic body's disaster management team, fire brigade, police, and other agencies were part of the safety and security apparatus for the immersions, an official said.

Chief Fire Officer P S Rahangdale said the fire brigade had deployed over 300 lifeguards to ensure the immersions passed off without any untoward incident.

In neighbouring Thane, a total of 6.190 idols were immersed.

According to figures released by the Thane Municipal Corporation, it included 5,574 public Ganpati idols and 482 community ones.