Over 200 terrorists killed in J-K so far this year: Army 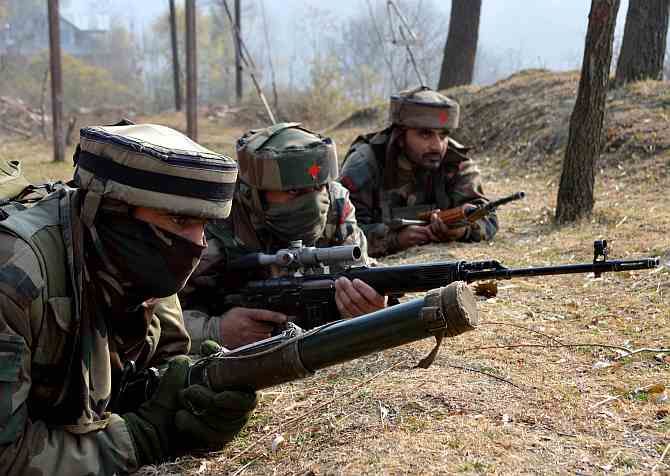 More than 225 terrorists have been killed in Jammu and Kashmir so far this year, Northern Army Commander Lt Gen Ranbir Singh said on Saturday.

He said initiatives taken by the government and security forces had resulted in a drop in the number of local youths being radicalised and taking to insurgency over the last few months.

"We have been able to neutralise a large number of terrorists. As on date, we have been neutralised more than 225 terrorists. However, couple of days of this year are still balanced (left)," Singh told reporters in Kapurthala in Punjab on the sidelines of his visit to Sainik School, his alma mater.

He said locals were sharing information about terrorists' movements with the army, which is a positive sign.

"That is a very positive sign, which shows a decline of militancy. It shows frustration on the part of Pakistan to push more and more terrorists into J&K. But our resolve is clear that as long as terrorists are moving around they shall not be provided space to carry out activities at their will. They will be acted against and neutralised," he said.

"We will ensure that peace and stability are maintained in J&K," he added.

Singh said the Army would not allow radicalisation of local youth in the state.

"All the initiatives by the government and security forces in J&K are paying rich dividends. There is reduction in the number of local youths joining militancy, which was taking place in last couple of months. There is a relative decline. There is also a decline in radicalisation," he said.

"That is the reason that situation is stable in J&K. But (if) any untoward thing happens, the Army acts swiftly and ensures peace, stability and security," he added.

Speaking about Pakistan, Singh said the neighbouring country was trying to spread terrorism beyond Kashmir in India.

The Army is taking all measures to arrest the spread of terrorism, he said.

He lauded the Kartarpur corridor, which will connect Dera Baba Nanak in India's Gurdaspur district with Gurdwara Kartarpur Sahib Narowal in Pakistan.

It is a good thing as it will encourage people to people contact, he said.

Warning infiltrators, Singh said those who dare to cross the Line of Control (LoC) will have to face death.

He also said the Army was giving befitting response to Pakistan's snipers and the force had kept up the pressure on the adversary along the LoC.