Over 1,700 test Covid positive in Kumbh Mela over 5-day period

A total of 1,701 people have tested positive for COVID-19 in the Haridwar Kumbh Mela area from April 10 to 14 confirming fears that one of the world's largest religious gatherings may contribute further to the rapid rise in coronavirus cases. IMAGE: A sadhu wears a mask before the procession for taking a dip in the Ganga during the Shahi Snan at "Kumbh Mela" amid the spread of coronavirus in Haridwar. Photograph: Danish Siddiqui/Reuters

The numbers include both RT-PCR and Rapid Antigen Test reports of devotees and seers of different akharas (ascetic groups) over the five-day period in the entire Mela Kshetra extending from Haridwar to Devprayag, Haridwar Chief Medical Officer Shambhu Kumar Jha said on Thursday.

More RT-PCR test reports are awaited and the trend shows that the number of infected persons in the Kumbh Mela Kshetra is likely to climb to 2,000, he said.

The Kumbh Mela area is spread over 670 hectares covering parts of Haridwar, Tehri and Dehradun districts, including Rishikesh.

A majority of the 48.51 lakh people who took part in the last two royal baths (Shahi Snan) held on the occasion of Somwati Amavasya on April 12 and Mesh Sankranti on April 14 were seen openly violating COVID norms like wearing of face masks and social distancing.

Despite their best efforts, the police could not impose the standard operating procedures (SOPs) on the seers of akharas and the ash-smeared ascetics thronging Har Ki Pairi ghat on the two major bathing days due to severe time constraints.

As the 13 akharas had to take their holy dip at Har ki Pairi in accordance with their allotted time slots before sunset, the police and paramilitary personnel were hard-pressed to ensure each of them vacated the ghat before the arrival of the next akhara in line to prevent chaos.

As seers were averse to undergoing RT-PCR tests till the Mesh Sankranti Shahi Snan of April 14, both testing and inoculation in the Kumbh Kshetra including the areas allocated to the akharas are likely to be stepped up in the coming days, Jha said. 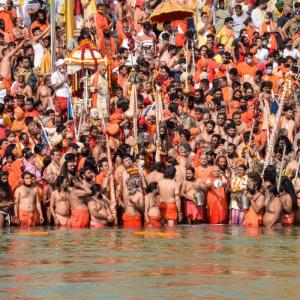 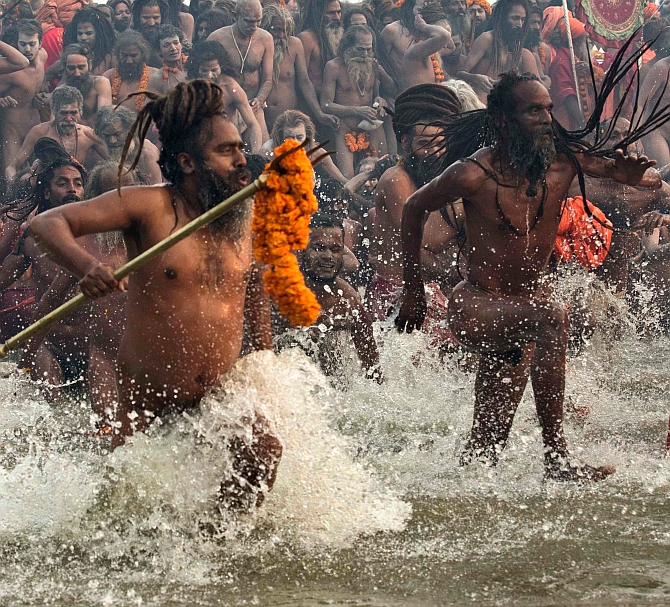