Amid protests, over 14 lakh download admit cards for NEET, JEE 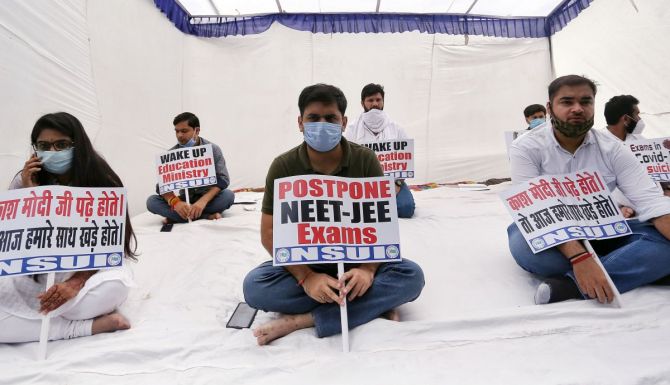 IMAGE: NSUI members hold placards as they stage a protest to demand the postpone JEE and NEET examinations amid COVID-19 pandemic, in New Delhi, on Wednesday. Photograph: ANI Photo

According to sources, at the meeting convened by Congress chief Sonia Gandhi, who said that students' problems were being dealt 'uncaringly' by the Centre, the chief ministers of West Bengal, Maharashtra, Punjab, Jharkhand, Rajasthan, Chhattisgarh and Puducherry agreed to the need for filing a review petition urging the Supreme Court to reconsider its recent order rejecting the postponement of the competitive exams.

Over 14 lakh students have already downloaded admit cards for engineering and medical entrance exams JEE-Mains and NEET scheduled in September, according to the officials of NTA, which released the admit cards for these exams on Wednesday, signalling that there may not be any further deferment.

However, there are many others who believe delaying the exams further may lead to the loss of an academic year for lakhs of students.

IIT Delhi Director V Ramgopal Rao said any further delay in conducting entrance exams JEE and NEET will have 'serious repercussions' on not only the academic calendar but also the career of bright students.

"The consequences of postponing these exams any further can have serious repercussions on IIT academic calendars and for candidates. I fail to see how we can run two batches together. It will become a zero academic year for lakhs of students," he said.

"Our academic calendars are too packed already and linked to too many other things. The delays can impact the careers of so many bright students," Rao said.

Jawaharlal Nehru University Vice Chancellor M Jagadesh Kumar said both JEE and NEET should be held as planned in September.

"This is not the right time to create further anxiety in students' minds by insisting on postponement of these exams. Even the Supreme Court has said that 'life must go on' and students 'cannot waste a whole year'," he said.

Amid rising clamour for postponement of the crucial exams in view of rising COVID-19 cases, the Ministry of Education (MoE) officials had reiterated on Tuesday that the exams will be conducted as per schedule in September.

Increasing the number of examination centres, alternate seating plan, fewer candidates per room and staggered entry and exit are among the steps the NTA will take for safely conducting NEET and JEE next month.

While JEE-Mains is a computer-based test, NEET is a pen-paper exam.

"Additionally, in case of JEE-Mains, the number of shifts have been increased from the earlier 8 to 12, and the number of candidates per shift has been reduced from earlier 1.32 lakh to 85,000 now," it said.

"In order to ensure proper social distancing inside the examination halls, the candidates will be seated in alternate seats in case of JEE-Mains. In case of NEET, the number of candidates per room has been reduced from 24 to 12," the NTA has said.

For ensuring social distancing outside the examination hall, the entry and exit of candidates has been staggered.

There have been demands from several quarters, not just political, to further postpone the entrance exams in view of increasing coronavirus cases.

On Tuesday, Swedish teen climate change campaigner Greta Thunberg also threw her weight behind postponing the exams in view of the pandemic.

"It's deeply unfair that students of India are asked to sit national exams during the COVID-19 pandemic and while millions have also been impacted by the extreme floods. I stand with their call to #PostponeJEE_NEETinCOVID," she said in a tweet.

The Supreme Court had last week dismissed a plea seeking postponement of the two exams amid spurt in the number of COVID-19 cases, saying precious year of students "cannot be wasted" and life has to go on.

"We find that there is absolutely no justification in the prayer made for postponement of the examination in question relating to NEET as well as JEE-Mains," the Supreme Court had said.

The NTA has also written to state governments to extend support in local movement of the candidates so that they are able to reach their examination centres on time.