Kerala's most savage monsoon in a century has killed 324 people over the last nine days, Chief Minister Pinarayi Vijayan on Friday said, issuing a fresh rain alert for the battered state. 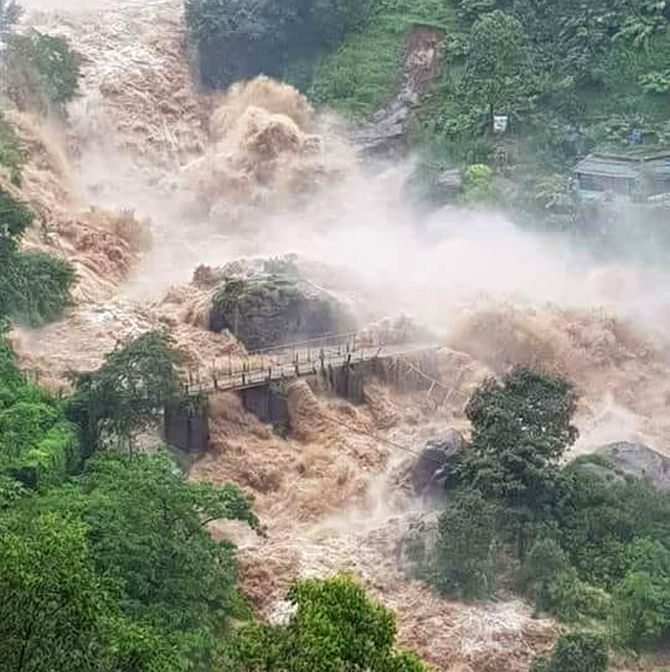 Nearly 2 lakh people have been displaced. The state, battling floods and landslides, plunged deeper into crisis on Friday, with hospitals facing shortage of oxygen and fuel stations running dry.

Till now, 42 Navy, 16 Army, 28 Coast Guard and 39 National Disaster Relief Force teams were engaged in rescue operations. Another 14 NDRF teams are expected to reach shortly. The military has pushed in more than 200 boats. Another four aircraft and three Coast Guard ships have also been brought in. 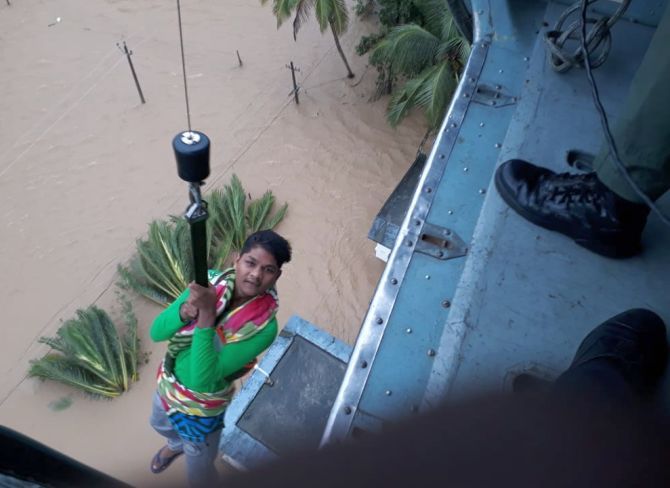 Personnel of the three services, besides the National Disaster Response Force resumed the gigantic task of evacuating people stranded on rooftops, highlands where hills came crashing down blocking roads and cutting them off the rest of the world, and those marooned in villages that have turned into islands.

Hundreds of people, including women, children and the elderly trapped in places inaccessible by boats were winched up by defence helicopters and shifted to safety. IMAGE: A view of a flood affected area in Kochi. Photograph: PTI Photo

TV channels telecast disturbing visuals of a woman in labour being pulled up with the help of a rope dropped down from a navy chopper, swinging violently in the air.

The woman, whose amniotic sac was ruptured, was shifted to a navy hospital where she gave birth to a baby boy.

Both the mother and the child are doing fine, officials said. 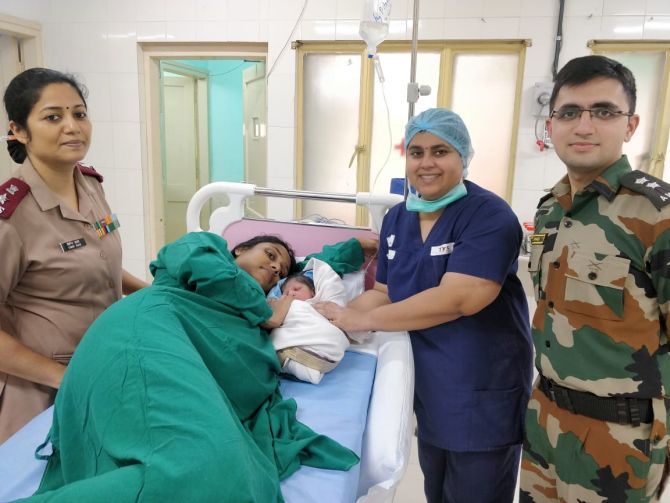 IMAGE: Sajita Jabeel, a 25-year-old pregnant woman, who was rescued by the navy from a flooded village in Kerala's Aluva, has given birth to a boy. Photograph: Kind courtesy @@indiannavy/Twitter

Desperate non-resident Keralites from Australia, the United States and the United Kingdom were making fervent pleas to authorities through television channels seeking help for their dear ones.

Soumya from Australia said her parents and their relatives were stranded in Aluva for the past two days.

Another said an elderly relative Mary Varghese was badly in need of an oxygen cylinder and her condition was worsening. 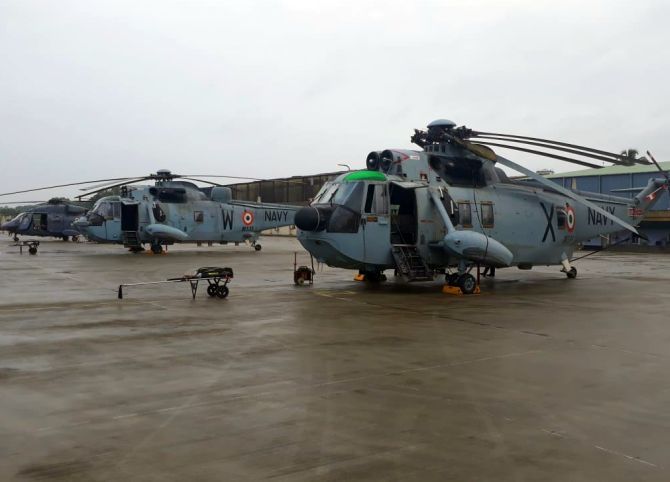 IMAGE: Drinking water and essential relief item being loaded at the INS Garuda base to deliver across flood-affected areas. Photograph: Kind courtesy @indiannavy/Twitter

In a WhatsApp video, a stranded woman with her 6-year-old child was seen pleading for help. "We have no food or water. Please help us."

Prime Minister Narendra Modi is expected to reach the state on Friday night and is likely to undertake an aerial survey of the flood-affected areas on Saturday. IMAGE: People being shifted to a relief camp after they were rescued from a various flood-hit areas, in Kochi. Photograph: PTI Photo

"We discussed the flood situation across the state and reviewed rescue operations. Later this evening, I will be heading to Kerala to take stock of the unfortunate situation due to flooding. @CMOKerala," Modi tweeted after talking to Chief Minister Pinarayi Vijayan by phone. The two have been in regular touch for the last two days.

Vijayan, who also spoke to Defence Minister Nirmala Sitharaman, said the situation continued to be "grave" with over 2.23 lakh people from more than 50,000 families sheltered in relief camps. 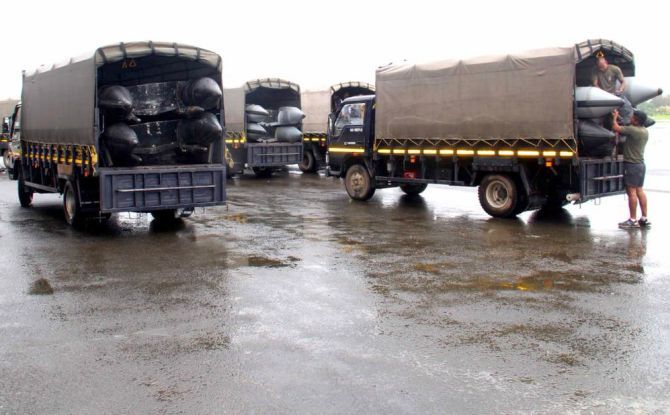 Though there was some let up in rains at a few places, four districts of Pathanamthitta, Alappuzha, Ernakulam and Thrissur remained in the throes of the monsoon fury.

Officials said many private hospitals in Ernakulam district are running out of oxygen, forcing the authorities to shift patients to nearbyfacilities. Many had to be evacuated after flood water entered hospitals. People in relief shelters also complained about dearth of food and drinking water.

Quite a few petrol pumps, even in places like the state capital Thiruvananthapuram, which has escaped the monsoon fury to some extent, have run dry. IMAGE: A man carries a grain sack as his house gets flooded after Kakkayam dam was opened following heavy monsoon rainfall in Kozhikode. Photograph: PTI Photo

Long queues of motorists were seen at several fuel stations in Thiruvananthapuram district. Authorities have directed each of these fuel bunks to keep in reserve 3000 litres of diesel and 1000 litres of petrol at all times for relief operations.

Local fishermen have also joined in the rescue mission with their boats and could be seen evacuating those marooned in places like Aluva, Kalady, Perumbavoor, Muvattupuzha and Chalakudy. Several roads in the hill district of Idukki, including in picturesque Munnar, have been badly damaged from a string of landslides. Wayanad, among the worst-hit by the floods, is cut off from the rest of Kerala.

The Kochi airport is shut with rain water flooding the runways. Several trains were either cancelled or rescheduled, sources said. Services on the Kochi Metro are, however, unaffected.

The weatherman has forecast heavy rain and gusty winds in various parts of the state.

The Supreme Court on Friday asked the National Crisis Management Committee and a sub-committee set up by Kerala to deal with the flood situation in the state to coordinate and explore the possibility of reducing the water level at the Mullaperiyar Dam by three feet.

A bench of Chief Justice Dipak Misra and Justice D Y Chandrachud asked Kerala and Tamil Nadu to abide by the directions given by NCMC on the rehabilitation of displaced people and the reduction of water level from the existing 142 feet to 139 feet at the dam.

The bench observed that it was not an expert to deal with such severe natural calamity and was leaving to the executive to contain the crisis.

The top court asked Kerala to submit the report on the steps taken on disaster management and rehabilitation measures.

The death toll in the monsoon fury in the southern state has crossed 167, while rains and flood water have caused extensive damage.

Rise in flood waters in Periyar River due to the rains and opening of the shutters of all major dams including Mullaperiyar, Cheruthoni, part of Idukki reservoir and Idamalayar, have severely affected the lives of people in downstream areas. 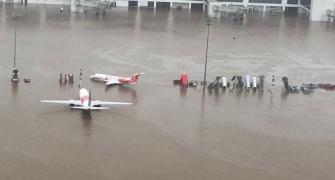