Our voters on holiday: BJP on civic poll defeat in Ambala

A Bharatiya Janata Party spokesperson on Tuesday blamed the year-end holiday season for the ruling party's failure to win the mayor's post in Ambala, saying its core voters were away on vacation. 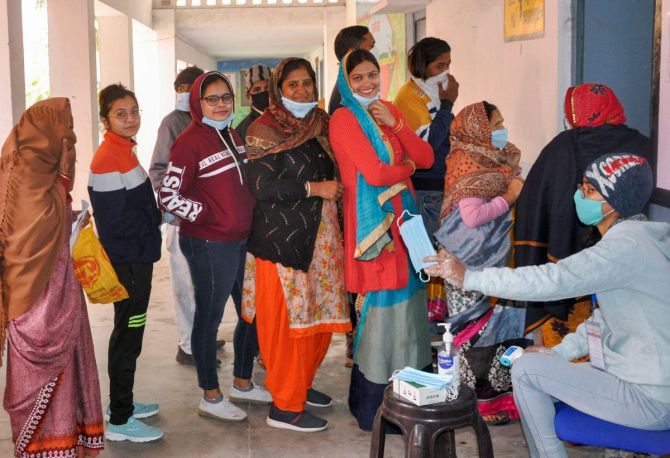 IMAGE: People wait to cast their votes for the municipal corporation elections, at a polling station in Sonipat. Photograph: PTI Photo

At another interaction with reporters, Haryana chief minister Manohar Lal Khattar, however, said the party performed satisfactorily “despite the odd circumstances” under which the recent civic elections were held in the state.

Khattar did not spell out the “odd circumstances” but appeared to be referring to the farmers' agitation over the three new central farm laws.

In a setback, the ruling BJP-JJP combine in Haryana on Wednesday could win only one of the three mayoral seats in cities of Ambala, Panchkula and Sonipat for which elections were held on Sunday.

While the BJP could win only in Panchkula, the Congress and the Haryana Jan Chetna Party bagged mayoral posts in Sonipat and Ambala, respectively.

The setback for the ruling coalition has come in the wake of the BJP sweeping mayors polls in five Haryana cities -- Hisar, Karnal, Panipat, Rohtak and Yamunanagar – in 2018.

On why the party lost mayoral polls in Ambala, state BJP spokesperson Sanjay Sharma said one of the reasons for the defeat could be the fact that many voters, who form the core vote bank of the party in urban pockets, went out on holidays and this resulted in low voter turnout.

The voting percentage in Ambala Municipal Corporation elections was 56.3 per cent as against 67 per cent in 2013, when polls were last held.

“We witnessed a low polling percentage because many people were on vacations for year-end holidays starting December 25,” he said.

“In the urban pockets of Ambala, which form our core vote bank, the voting percentage was even less and ranged nearly 43-50 per cent, which hurt our prospects,” said Sharma, whose wife Vandana lost city's mayoral poll to Haryana Jan Chetna Party's Shakti Rani Sharma.

He said he would also raise the issue with the Election Commission so that polls are not scheduled during a holiday or a major festival season.

Besides the polls for Ambala, Panchkula and Sonipat municipal corporations, the elections were also held to elect presidents and members of Rewari municipal council and the Sampla, Dharuhera and Uklana municipal committees.

Chief Minister Khattar, however, expressed satisfaction over local bodies poll results, saying the BJP registered wins in 36 municipal wards as against 19 of the Congress.

At a press conference, Khattar also spelt out various initiatives taken by his government for the welfare of various sections of the society this year amid the coronavirus pandemic.

On the Congress demand for a special assembly session to take up a no-confidence motion against the state government, Khattar quipped, “If we have won 36 wards and Congress 19 even in odd situations, is that not a mandate?”

“There is no need to summon Vidhan Sabha session now, it will be held at its own time in February or March,” he said.

On the farmers' issue, he said the Centre is already engaged in talks with them.

“We are hopeful that the issue will be resolved soon,” he said.

Spelling out various initiatives for farmers, he said, “In Haryana, what we did for farmers in six years, possibly no other state would have done”.

“For example, we ensured smooth procurement of crops, we started Bhavantar Bharpai Yojana (price difference compensation scheme) so that farmers are protected against price fluctuations”.

The state is also procuring seven other crops including moong, maize, sunflower and groundnut on MSP, he said.

He said that a Rs 7,000 crore international level fruit and vegetable mandi was being set up in the state.