'Our premise is very simple, we don't want any more illegal foreign immigrants coming and settling in Assam, we have already accommodated far too many beyond our capacity. And we don't want our Assamese culture to be diluted, or become a minority in our own home state'

'This movement is not about Hindus, Muslims or Bengalis, but about all Assamese, irrespective of their religious faith or economic class, it's about our Assam and Assamese pride' 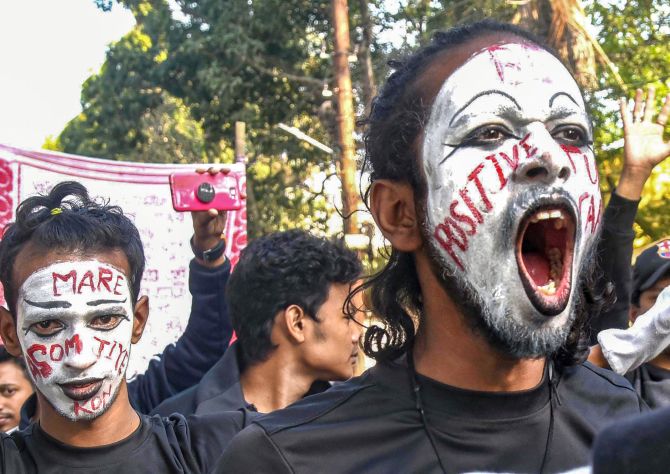 The opposition to the amended citizenship law will go on in a Gandhian way till it is revoked, says All Assam Students' Union's chief advisor Samujjal Bhattacharya, asserting that Assamese people are fighters to the core and their voices will prevail.

The AASU, which led the historic Assam agitation from 1979-85, is now spearheading the anti-citizenship law movement.

The protesters are seeking that the new legislation be revoked, saying it "violates" the Assam Accord of 1985.

"We fought the Citizenship (Amendment) Bill tooth and nail, and we are against this CAA, and people of Assam will continue to oppose this with unrelenting spirit. We will not give up, our fight shall go on till the CAA is revoked," Bhattacharya said.

The AASU leader, who was also part of the Assam agitation, asserted that the anti-CAA movement has witnessed "unprecedented solidarity" from people who defied curfews like never before to protest peacefully and democratically to make their voices heard.

"I saw how people protested in Assam movement of 80s, but the way Assamese have come out in such huge numbers in such a short period, and at times spontaneously, speaks volumes for the pain they are suffering due to the imposition of the Citizenship (Amendment) Act. People of Assam have rejected the CAA," Bhattacharya said.

When asked whether the AASU and the masses will be able to sustain the momentum in the long run if the government does not respond to their demands, he said, "We Assamese are fighters to the core."

"And this movement is not about Hindus, Muslims or Bengalis, but about all Assamese, irrespective of their religious faith or economic class, it's about our Assam and Assamese pride. Practising Gandhian values, we have uncompromisingly protested with 'satyagraha' and 'ahimsa'. And, I feel that voices of people will prevail eventually," he said.

Hearing a batch of pleas challenging the CAA, the Supreme Court on Wednesday decided to examine the constitutional validity of the act but refused to stay its operation.

The newly-amended law seeks to grant citizenship to non-Muslim migrants belonging to Hindu, Sikh, Buddhist, Christian, Jain and Parsi communities who came to the country from Pakistan, Bangladesh and Afghanistan on or before December 31, 2014.

"We Assamese people protested peacefully when the curfew was on, defied it and courted arrest as it our right to protest against a law which we know is against Assam and its people. And the CAA violates the Assam Accord of 1985," said the chief advisor of AASU, who has been one of the vocal faces of this movement.

The accord clearly mandated that all illegal Bangladeshi immigrants coming after the all-accepted cut-off date of March 24, 1971 will be detected and deported, irrespective of their religion, he said.

"Our premise is very simple, we don't want any more illegal foreign immigrants coming and settling in Assam, we have already accommodated far too many beyond our capacity. And we don't want our Assamese culture to be diluted, or become a minority in our own home state," Bhattacharya said.

The AASU has been holding protests across Assam. 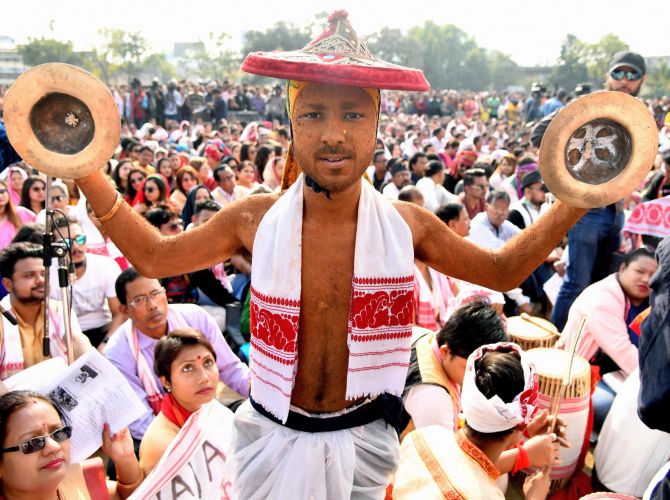 In Guwahati, a huge number of people have been gathering at two main venues -- Latasil playground and AEI grounds in Chandmari -- to register their dissent.

In a protest called by the artiste community of Assam and supported by the AASU and other outfits on Thursday, Bhattacharya had alleged that the government seeing the "unflagging spirit" of the people was using the "triple ploy" of "daman, pralobhan, and vibhajan (suppression, enticement and division) to "weaken the movement".

"But we will not bend or relent but fight for our mother land," he said, as slogans of "Jai Ai Axom" (Glory to Mother Assam) and "CAA aami namanu" (Will not accept CAA) rent the air.

Men and women, many wearing traditional 'gamosas', raised their hands in unison, reaffirming the resolve to fight the contentious legislation.

"For nine days, it (the government) has shut mobile internet, impinging on rights of people. What is it afraid of," he asked.

Mobile Internet services were restored across Assam on Friday morning, 10 days after it was shut by authorities to check spread of rumours and maintain law and order in the wake of violent protests in the state over the Citizenship (Amendment) Bill.

Curfew clamped the same evening was lifted in Guwahati on Tuesday morning.

Walls across Guwahati are smeared with anti-CAB, anti-CAA and anti-BJP slogans, punctuated with 'Jai Ai Axom', the rallying cry of the movement.

On Saturday, all-women protests were held across Assam.

"The 'nari shakti' has added an extraordinary strength to our movement," Bhattacharya said.

"Also on December 24, 26 and 28, meetings and marches will be held at grassroots levels, 'padyatras' and cycle rallies to connect more with the masses," he said.

Hitting out at the Modi government, Bhattacharya said, "The BJP government is celebrating 150 years of Mahatma Gandhi with events. We are holding satyagrahas and peacefully opposing a wrong law. We are actually celebrating the values espoused by Gandhiji."