Other 'Azadi Mahotsav' posters will have Nehru's image: ICHR

Facing flak from opposition parties for excluding Jawaharlal Nehru's image from a poster celebrating the 75th year of independence, the Indian Council of Historical Research said the controversy over the issue is "unnecessary" as other posters being released in the coming days will feature the first prime minister. 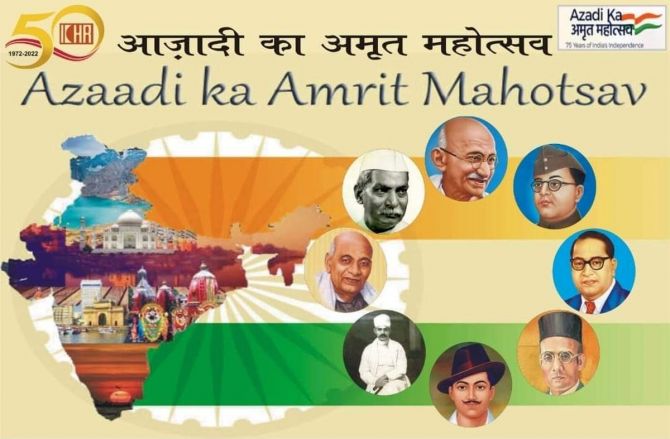 "We are not trying to undermine anyone's role in the movement," a top ICHR official said, dismissing criticism on the issue, and added the poster was one of the many released as part of the 'Azadi ka Amrit Mahotsav' celebrations.

The Congress, however, questioned the silence of Prime Minister Narendra Modi on the issue and demanded that he rise above his prejudices and intervene. Opposition parties had said the omission was deliberate.

The ICHR, an autonomous body under the Ministry of Education, has been running a series of lectures and seminars on the theme of the Independence struggle under the 'Azadi ka Amrit Mahotsav' celebration.

"This is only one of the posters released as part of the 'Azadi ka Amrit Mahotsav' celebrations. There will be several others and Nehru will be featured in them... controversy around this is unnecessary," the ICHR official told PTI.

As part of the lecture series, the council has invited various historians and academicians to speak on different topics related to India's freedom movement.

Arvind Jamkhedkar, whose tenure as ICHR chairman ended in March this year, said not mentioning Nehru is inadvertent on part of the council.

"It is inadvertent. Nobody can miss a person like Nehru when we talk about freedom struggle. It could be due to carelessness but definitely not deliberate. No political motives should be seen behind it. I reiterate this must not be deliberate," he told PTI.

The ministry of education has not appointed Jamkhedkar's successor yet.

Opposition parties had targeted the government for the exclusion of the image of the country's first prime minister from the poster and suggested that it had been done deliberately.

"Why is Prime Minister silent on omission of Nehru's picture from ICHR's celebration of India@75. This goes against all facts and authentic history. We know PM wants to obliterate Nehru's legacy, but this is unconscionable! He must rise above his prejudices and tell ICHR to fix it," said Congress leader Jairam Ramesh.

Party leader P Chidambaram also hit out at ICHR over the controversy and said the explanation given is ludicrous.

Ford was the first to invent the motor car and the Wright brothers were credited for building and flying the world's first aircraft.

"ICHR Member-Secretary's explanation for the omission of Jawaharlal Nehru from the first digital poster to celebrate 75 years of independence is ludicrous," he said on Twitter.

"After bowing down to prejudice and hate, it is best the Member-Secretary shuts his mouth," he also said.

Congress general secretary K C Venugopal said, "Petty politics once again! May I remind the ruling dispensation that any celebration of our nation's glorious freedom movement is ahistorical without the mention of the progressive and undeterred contributions of Nehru ji. You may omit his name, but can never erase his ideas."