United States President Barack Obama has warned that horrific mass shooting incidents like the recent one in Orlando will continue to occur unless tougher gun control laws are adopted. 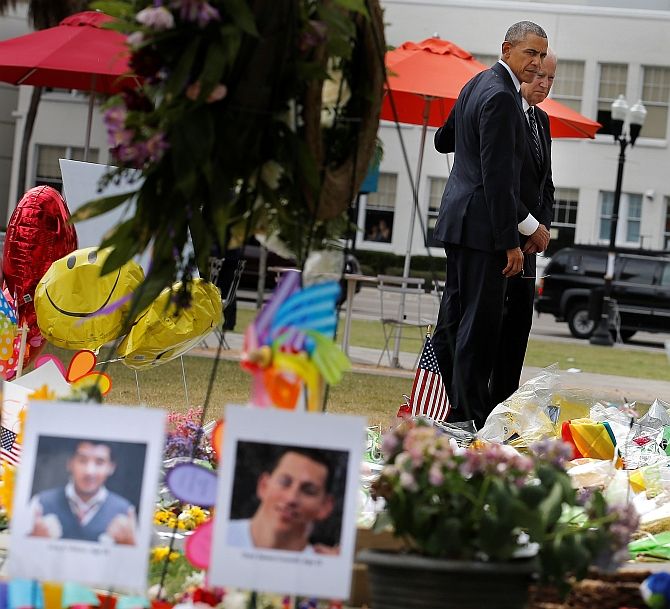 US President Barack Obama and Vice President Joe Biden pause as they place flowers at a makeshift memorial for shooting victims of the massacre at a gay nightclub in Orlando, Florida, US. Carlos Barria/Reuters

"We can't anticipate or catch every single deranged person that may wish to do harm to his neighbours, or his friends, or his co-workers, or strangers. But we can do something about the amount of damage that they do," Obama told media persons.

"Unfortunately, our politics have conspired to make it as easy as possible for a terrorist or just a disturbed individual like those in Aurora and Newtown to buy extraordinarily powerful weapons -- and they can do so legally," Obama said.

Obama along with Vice President Joe Biden met yesterday victims and families of the weekend's mass shooting in which a self-radicalised Afghan-origin youth pledging allegiance to the ISIS killed 49 people in a gay club in Orlando, Florida.

Another 53 were injured during the shooting that took place in the wee hours of Sunday. 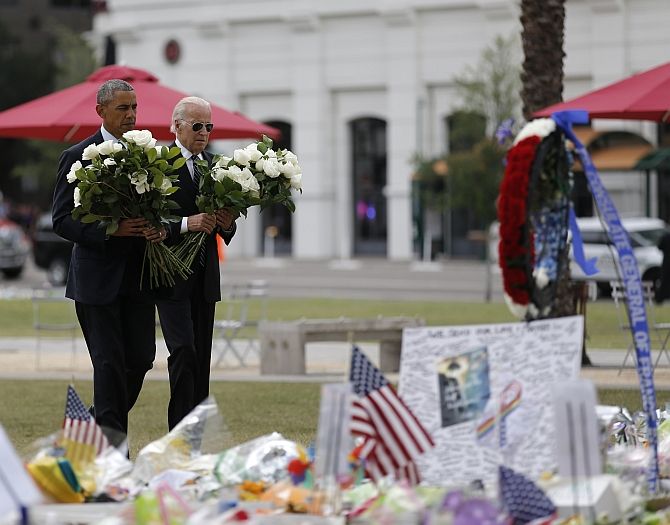 IMAGE: US President Obama and Vice President Joe Biden place flowers at a makeshift memorial for shooting victims of the massacre at a gay nightclub in Orlando. Carlos Barria/Reuters

While laying flowers at a memorial in downtown, about a mile and a half from the club where the shooting occurred four days earlier, Obama said the city was “shaken by an evil, hateful act”.

Obama said that when he and Vice President Biden met with family members of the people slain on Sunday, their grief was indescribable.

"This debate needs to change. It's outgrown the old political stalemates. The notion that the answer to this tragedy would be to make sure that more people in a nightclub are similarly armed to the killer defies common sense. Those who defend the easy accessibility of assault weapons should meet these families and explain why that makes sense," Obama said.

"And if we don't act, we will keep seeing more massacres like this -- because we'll be choosing to allow them to happen. We will have said, we don't care enough to do something about it," Obama added.

Republican presidential presumptive nominee Donald Trump has said that the casualties could have been far less if people were allowed to carry guns.

Obama has been seeking tougher gun control laws that make its difficult for people to purchase such weapons of mass casualties.

The strong gun lobby assisted by a Republican-controlled Congress is preventing Obama to accomplish his goal of a tough gun control laws. 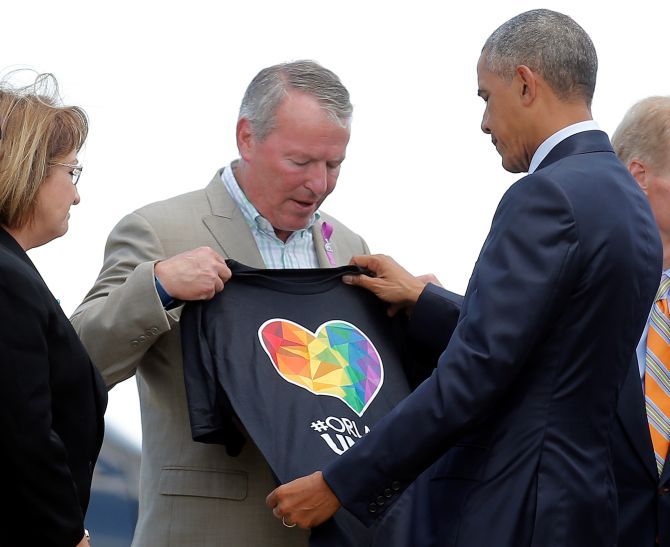 IMAGE: US President Barack Obama receives a t-shirt from Mayor of Orlando Buddy Dyer (C) as he arrives in Orlando to meet with families of victims of the Pulse nightclub shooting, in Florida, US. Photograph: Carlos Barria/Reuters

"Today, once again, as has been true too many times before, I held and hugged grieving family members and parents, and they asked, why does this keep happening? And they pleaded that we do more to stop the carnage," he said.

In his presidency, Obama has made seven such trips to meet families and victims of a mass shooting.

Hoping that Senators would "rise to the moment and do the right thing", Obama said he is pleased that the Senate will hold votes on preventing individuals with possible terrorist ties from buying guns, including assault weapons.

"I've said this before -- we will not be able to stop every tragedy. We can't wipe away hatred and evil from every heart in this world. But we can stop some tragedies. We can save some lives. We can reduce the impact of a terrorist attack if we are smart," Obama said.

"They don't care about the politics. Neither do I. Neither does Joe. And neither should any parent out there who's thinking about their kids being not in the wrong place, but in places where kids are supposed to be," Obama said.

The Federal Bureau of Investigation is investigating the mass shooting as an act of terror. In a 911 call during the attack, Omar Mateen, 29, the shooter, pledged allegiance to ISIS and its leader.

Obama said the US-led coalition is determined to defeat ISIS.

"We're going to do all that. Our resolve is clear. But given the fact that the last two terrorist attacks on our soil -- Orlando and San Bernardino -- were homegrown, carried out it appears not by external plotters, not by vast networks or sophisticated cells, but by deranged individuals warped by the hateful propaganda that they had seen over the Internet, then we're going to have to do more to prevent these kinds of events from occurring," Obama said.

It's going to take more than just our military, Obama asserted.

"It's going to require more than just our intelligence teams. As good as they are, as dedicated as they are, as focused as they are, if you have lone wolf attacks like this, hatched in the minds of a disturbed person, then we're going to have to take different kinds of steps in order to prevent something like this from happening," he said. 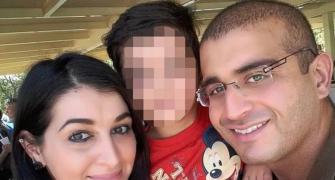 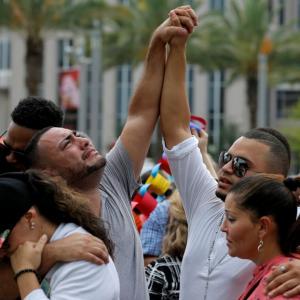 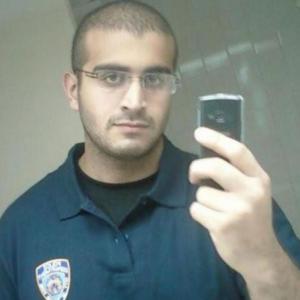