Seven days after being abducted by the Maoists, junior engineer Pabitra Majhi was freed in a remote area of Malkangiri district on Wednesday even as there was no clear information on the whereabouts of District Collector R V Krishna.

"Majhi was taken to Chitrakonda by two local people on a motor-cycle after being released by the Maoists in a remote forest area," Chitrakonda Tehsildar D Gopal Krishna said on phone, adding he appeared to be fine.

However, there was no clear information on the whereabouts of Krishna, who was also kidnapped along with Majhi on February 16, he said.

Government sources said the 2005 batch IAS officer is expected to return soon. Soon after his arrival at Chitrakonda, the junior engineer was taken to the tehsil office where government officers met him, official sources said.

"The engineer was fine though he seemed to be tired. Doctors were examining him," the sources said.

A huge crowd gathered at the tehsil office to have a glimpse of the freed engineer. Majhi was later shifted to a guest house of Balimela Dam Project, the sources said.

"The mediators on behalf of the Maoists gave a firm commitment on Tuesday on the safe return of Krishna and Majhi within the next 48 hours, that is latest by tomorrow," Chief Minister Naveen Patnaik said in the assembly.

The development came as the Orissa government conceded all 14 demands of the Maoists following three days of intense negotiations between Naxal-appointed mediators. 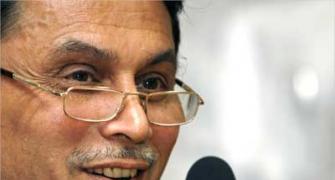