Source: PTI
Last updated on: September 28, 2011 18:04 IST
With 11 more deaths, the toll in the second spell of Orissa floods mounted to 38 on Wednesday as the government began post-relief reconstruction work and decided to continue air-dropping of food articles till Thursday.

Certain pockets in Jajpur and Kendrapara districts still remained marooned though flood water receded in major rivers in north Orissa, giving respite to the affected people. Flood water level receded by five to six feet at several places as discharge into the sea was apparently facilitated after new moon day on Tuesday.

The death toll due to flood, which stood at 27 on Tuesday night, rose to 38 as the government received reports about 11 more casualties, Revenue and Disaster Management Minister S N Patro said, adding three more persons were missing.

Nine casualties each were reported in Jajpur and Bhadrak districts, followed by six deaths in Kendrapara, four each in Keonjhar and Sundargarh, three in Balasore, two in Dhenkanal and one in Mayurbhanj.

The government has decided to continue air-dropping of food in these three areas on Thursday also, he said, adding tractors and boats were being used for distribution of relief materials in a large number of flood-affected areas.

With gradual improvement of the situation, post-relief operation like repair of roads and tubewells, healthcare, sanitation and disinfection of drinking water sources were being looked into.

Orissa Chief Minister Naveen Patnaik, who visited areas like Aul, Rajkanika, Bari and Bhandaripokhari, said assistance for rabi crops would be provided to farmers in view of huge crop loss due to floods. 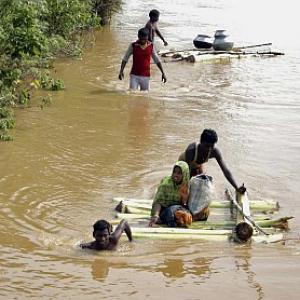