OPS wanted to meet me in bid to 'oust' Palaniswami, claims Dinakaran 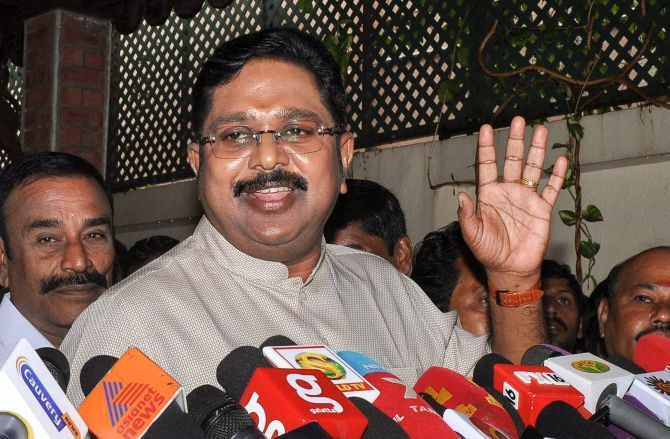 In an apparent attempt to drive a wedge between All India Anna Dravida Munnetra Kazhagam leaders Edappadi K Palaniswami and O Paneerselvam, ousted party leader T T V Dinakaran on Friday claimed that the deputy chief minister approached him for a rapprochement.

Panneerselvam flatly denied Dinakaran's claims that he wanted to dethrone Palaniswami and take over as chief minister, saying he was a three time chief minister and that he was content with being one.

He did admit he met Dinakaran last July as claimed by the latter, but only with the hope that the Amma Makkal Munnetra Kazhagam leader would have been a 'reformed' man.

"He (Panneerselvam) wanted to meet me to oust the Chief Minister," Dinakaran told reporters a day after his close aide and one of the disqualified MLAs Thanga Tamilselvan made a similar claim during a TV debate.

The timing of Dinakaran's salvo assumes significance amid reports that Panneerselvam was sulking over allegedly being made to play second fiddle to Palaniswami, a charge denied by the AIADMK Coordinator and the party.

Dinakaran said Panneerselvam had met him in July last year and sent word through a common friend that he wanted to meet him again in September-end this year.

However, he refused to meet him in September, said Dinakaran, nephew of deposed interim party general secretary V K Sasikala.

Panneerselvam, who had merged his faction in August last year with the group led by Palaniswami, had said he was ready to 'oust' Palaniswami and promote Dinakaran to a 'significant' post, he maintained.

He claimed that during the meeting last year, the deputy chief minister had regretted revolting against Sasikala and the subsequent criticism against the family.

Dinakaran said he was revealing the information now since Panneerselvam was being critical of him in public, even while 'trying for a rapprochement' and asserted that the latter could not deny meeting him.

"His only interest is to become chief minister. He tried it last week also. I wanted to put a full stop to all of it, so I revealed (information about the meeting)," he said when asked about Panneerselvam's motive in seeking the meeting.

Responding to Dinakaran's claims, Panneerselvam admitted he did meet the former AIADMK leader, but only after a request made by the former through a common friend.

"That common friend expressed regret today over the matter," Panneerselvam told reporters at his residence in Chennai.

He said he had gone for the meeting, a month ahead of the merger of two factions led by him and Palaniswami, with the hope Dinakaran would have been a reformed man, even as there was some dissent against him in the chief minister's camp.

"I thought he would have been reformed. But from what he spoke, it seemed he was keen on capturing the party and the government.... At no point can they (Sasikala family) take over the party and government as people will not support them," he said.

The M G Ramachandran founded party was a democratic organisation where even a ground level worker could rise to great heights, the former chief minister said.

Panneerselvam said he was content that Jayalalithaa had made him CM twice and he continued in that post after her death as well. Therefore he had no ambitions to come to the post.

He was more concerned about the party and sensing Dinakaran's desire to take control of it, had discussions with Palaniswami for a merger, he said.

Subsequently, he sought a Minister's post for his aide K Pandiarajan alone, but the ruling dispensation wanted him also in the cabinet, Panneerselvam said.

Dinakaran was trying to create confusion in the party over its popularity among the masses and supporters, and was 'peddling all kinds of lies' out of frustration, he alleged.

"Their camp recently even claimed that I was planning to topple the government and become Chief Minister...he is trying to to create confusion and malign my reputation."

"This is a conspiracy and none of his designs will fructify," Panneerselvam said, adding he would never aspire to become chief minister, and that too by crooked means.

He also denied approaching Dhinakaran for another meeting in September, saying he has had no truck with the AMMK leader after last year's episode.

"He has no political decency and it was just proven. People do not believe his false charges...they will never do," he added.

"I waged a Dharmayuudham to ensure that the party and government did not go to the family and I am still doing it. Palaniswami is now leading the government," he said, trying to indicate he is now the Coordinator of AIADMK, its top post.

He said Panneerselvam had revolted against the 'very family', referring to that of Sasikala, and joined hands with Palaniswami to deliver a pro-poor government.

"They (members of the Dinakaran camp) tried to topple the government for the last one year and therefore he is levelling such charges now to create confusion. But the big secret is that there was a request from Dinakaran a month back for his outfit to be merged with AIADMK," he told reporters.

Dinakaran had suggested Palaniswami could continue as chief minister, but the offer was turned down as the ruling camp had been opposing him for long, he said.

"That is why they are trying to create confusion among us," Thangamani added. 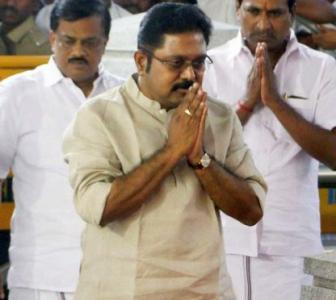 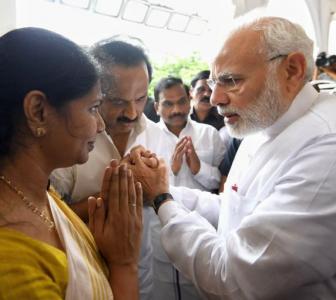 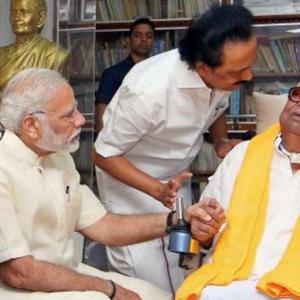