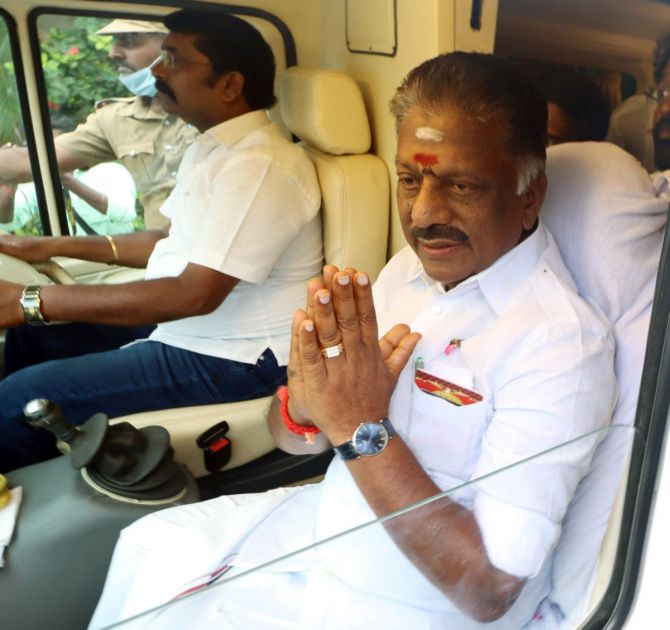 When such a fight continues, in the course of time, it could favour the ruling Dravida Munnetra Kazhagam and its allies and lead to more fragmentation of pro-AIADMK and anti-DMK votes. V K Sasikala's nephew, TTV Dhinakaran-led Amma Makkal Munnetra Kazhagam played spoilsport for the AIADMK in a number of constituencies in last year's assembly election.

A bid to 'sabotage' the party administration by raking up the demand for a single leadership favouring EPS and neglecting him and thereby violating party bylaws are among the key arguments put forth by OPS in his June 27 memorandum to the Election Commission.

OPS stopped short of requesting the EC to intervene to help establish his rights as per AIADMK bylaws and said the representation is for the panel's 'kind consideration and appreciation', as required under the 1951 legislation.

Durai Karuna, political commentator and a chronicler of the AIADMK for decades, told PTI that both EPS and OPS are in no mood for a compromise, as of now.

"Palaniswami camp is determined to relieve OPS of his party post of treasurer and that of deputy leader in the Assembly. Their idea appears to eventually show the door to Panneerselvam. Everything that is being done and the kind of narrative being built by EPS camp is a clear pointer of their goals", he said.

"OPS has made a lot of compromises to keep EPS in good humour. OPS was coordinator only on paper and the real power was wielded by EPS. Now that arrangement is going to be formalised and that is a mere technicality."

After being the chief minister thrice, Panneerselvam agreed to be the deputy CM in 2017. Following the DMK's win in assembly election last year, he also accepted the offer of deputy leader in the assembly, while EPS became the leader of opposition.

In his nine-page petition titled 'detailed report', to the EC under the Representation of People Act, 1951, Panneerselvam said he was duly elected as party coordinator last year.

Amendments of 2021 to bylaws made it clear the coordinator (OPS) and joint coordinator (EPS), constituted the apex party leadership, which could be elected only by primary members by way of a single vote. Both of them were elected unopposed last year and five years is the tenure of their posts.

Along with joint coordinator, only both of them had executive powers to administer the party and convene any meeting. Hence, all steps taken by sidelining him including the election of Tamilmagan Hussain as presidium chairman and rejection of 23 proposed resolutions in the June 23 GC meet were untenable.

OPS blamed vested interests and asserted that the general council and Monday's meeting of top AIADMK functionaries were invalid considering the violations of party bylaws. Similarly, a GC meet being convened again on July 11 is also not valid.

He also cited a verdict of the Madras high court's division bench to point out that no decision shall be taken other than the 23 items mentioned in the draft resolutions. "The members of the general council are at liberty to discuss any other matter, however, no decision should be taken in the General Council with regard to the same," Panneerselvam quoted the judgment.

Without any discussion or authority, AIADMK's C Ve Shanmugam announced in the GC meet last week that all the resolutions were rejected, he said. Shanmugam, a party heavyweight in northern Tamil Nadu, is also a strong voice favouring EPS for a single supreme post.

"It is quite shocking that some persons in the meeting hurled various objects including water bottle towards the coordinator and his supporters and one such water bottle has hit the police security officer who has escorted the coordinator of the party," the petition said.

Durai Karuna said Panneerselvam has the option of approaching courts and to wait for EC's intervention to take on the EPS camp. OPS, however, has to work to retain the sympathy that he has 'gained' in view of the objectionable treatment meted out to him at the June 23 general council meeting, he said.

Though office-bearers and the party organisation are with EPS, Panneerselvam has sympathy among several sections of cadres, the grassroots level local and regional leadership and the general public to a considerable extent.

"This power struggle could go on for a long time. Anything may happen. The AIADMK symbol may be blocked by EC. If the fight goes on as we think now, it might result in OPS, Sasikala and Dhinakaran joining hands."

Such a combination will be a formidable force in several southern regions. It may help consolidate the votes of the Mukkalathor -- a Most Backward Community -- and they could also grab a chunk of AIADMK's traditional votes, he said.

Though one could gauge the real strength of EPS, OPS, Sasikala-TTV Dhinakaran group only after the votes are counted for the 2024 Lok Sabha polls, divisions or a split in AIADMK votes would only help the ruling DMK and allies to electorally consolidate more. The pro-AIADMK or anti-DMK votes would get more and more divided and such a thing may also help BJP to an extent, he said.