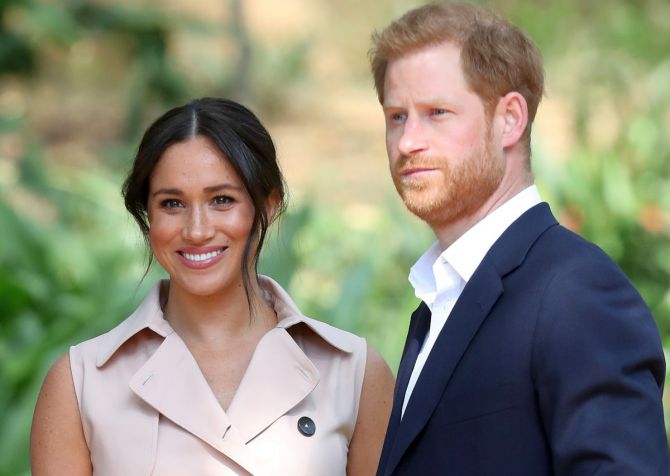 IMAGE: The 90-minute programme will see Harry and Meghan discuss their marriage, philanthropic efforts and their move away from Britain's royal family with Oprah. Photograph: Chris Jackson/Getty Images

The announcement comes on the heels of the couple announcing that Meghan is pregnant with their second child. Their son, Archie, is 21 months old.

According to The Hollywood Reporter, the special is titled "Oprah With Meghan and Harry" and it will air on the network on March 7.

It will be Prince Harry and former actor Meghan's first sit-down interview since their engagement in 2017.

The 90-minute programme will see the couple discuss their marriage, philanthropic efforts and their move away from Britain's royal family with Oprah, who also attended their wedding in 2018.

In early 2020, Meghan and Harry announced they would "step back" from their positions as senior members of the British royal family and moved to North America, citing what they said were the unbearable intrusions and racist attitudes of the British media. They recently bought a house in Santa Barbara, California.

Since then, the couple has signed an overall deal with Netflix to produce programming for the streamer and a podcast deal at Spotify.

Oprah, who is one of the couple's neighbours, is also teaming up with Harry for a mental health docuseries for Apple TV Plus.