Describing demonetisation as a “tragedy” that destroyed millions of lives, Congress chief Rahul Gandhi on Thursday alleged that the government’s move was a carefully planned “criminal financial scam” whose full truth is yet to be revealed. 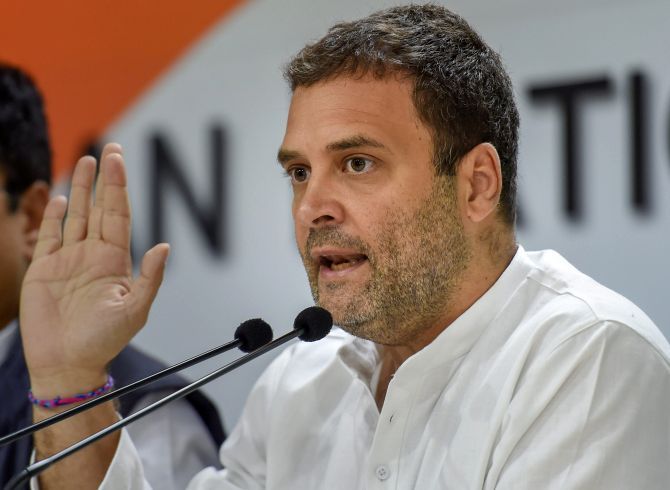 On the second anniversary of note ban, he also alleged that demonetisation was a planned “brutal conspiracy” and a “shrewd scheme” to convert the black money of Prime Minister Narendra Modi’s “suit-booted friends”.

“India will discover, no matter how the government tries to hide it, that demonetisation wasn’t just an ill-conceived and poorly executed economic policy with ‘innocent intent’, but a carefully planned, criminal financial scam,” Gandhi said in a statement.

“The full truth about demonetisation is not out yet. India’s people will not rest till it is,” he said.

In his statement, Gandhi said on the second anniversary of the prime minister’s “monumental blunder, the government’s spin-doctors, including our incompetent finance minister, have the unenviable task of defending an indefensible, criminal policy”.

“Demonetisation was a tragedy. India has faced many tragedies in its past. Many a time have envious, external enemies tried to hurt us. But demonetisation is unique in the history of our tragedies because it was a self-inflicted, suicidal attack that destroyed millions of lives and ruined thousands of India’s small businesses,” he alleged.

He claimed that the worst hit by demonetisation were the poorest of the poor, who he said were forced to queue for days to exchange their meagre savings.

Modi’s demonetisation cost India over one and a half million jobs and wiped out at least 1 per cent from India’s GDP, Gandhi alleged.

November 8th will forever go down in the history of India, as a day of infamy. Two years ago, on this day, Prime Minister Modi unleashed the tyranny of demonetisation on the nation.

“At eight that night, he appeared on television to deliver a unilateral announcement, that we now know didn’t even have the support of his own economic advisors. With that one declaration of demonetisation, Mr Modi took 86% of India’s currency out of circulation, bringing our economy to a grinding halt,” he said.

Former prime minister Manmohan Singh said on the decision’s second anniversary on Thursday that the havoc it unleashed on the economy and society is now evident.

The Congress leader asked the government to not resort to further unorthodox, short-term economic measures that can cause any more uncertainty in the economy.

“Today is a day to remember how economic misadventures can roil the nation for a long time and understand that economic policy making should be handled with thought and care,” Singh said in a statement.

He urged the government to restore certainty and visibility in economic policies.

“Notebandi (demonetisation) impacted every single person, regardless of age, gender, religion, occupation or creed,” he said.

The Congress, too, criticised the Prime Minister Narendra Modi-led Centre’s move by calling it a ‘black day’ for Indian democracy and economy.

“The cost and destruction by demonetisation was endured by every citizen of this country other than few crony capitalist friends of Prime Minister Modi. Demonetisation was a black day for our democracy and our economy,” read a post on the official Twitter handle of the Congress party.

Resonating similar sentiments, West Bengal Chief Minister Mamata Banerjee also took to the micro-blogging site and wrote, “#DarkDay Today is the second anniversary of #DeMonetisation disaster. From the moment it was announced I said so. Renowned economists, common people and all experts now all agree.”

Since then, various opposition leaders have highly criticised the Centre’s move, while the members of the Bharatiya Janata Party and its allies have backed the decision.