Opposition leaders have questioned the alleged misuse of public funds in organising the second global meet on Bihar. They have claimed that the event is merely an "image building" exercise for Chief Minister Nitish Kumar.

The much-hyped meet -- which began on Friday and involves nearly 1,000 participants including NRIs -- aims to discuss ways to accelerate the momentum of high growth and development strategies for Bihar.

"If the mega meet  organised with public money of  the poorest of the poor  of this backward state has no agenda of investment and attracting investors, what is the motive behind it except  the image building of Nitish Kumar," queried Rashtriya Janata Dal leader Ram Kirpal Yadav.

Leader of Opposition Abdul Bari Siddiqui expressed doubts about whether the global meet will help Bihar in any way.

Congress leader Prem Chand Mishra conceded that Bihar badly needed private investment for development but added that Nitish Kumar seemed keener about his own development by organising such meets, which will not help a poor state like Bihar.

"Nitish Kumar was part of BJP's India Shining campaign when he was a central minister in the NDA government led by Prime Minister Atal Bihari Vajpayee. Now he is trying to repeat Bihar shining by organising such a meet. Private investment is must for Bihar's development but the chief minister is not aiming for it. The central government has been providing funds like never before for welfare schemes and infrastructure building," said Mishra.

The Communist Party of India Marxist Leninist (liberation) leader Dipankar Bhattacharya has described the meet as a futile exercise.

"It is only a publicity stunt of the state government to hide its failures on all fronts," he said.

"There is no scope for proper employment as factories are not coming up. Road conditions  have turned bad in the last two years and law and order conditions have deteriorated. What is changing in Bihar? This global meet is just a branding exercise like the India shining campaign," Bhattacharya alleged.

Siddiqui added, "Our experience is bitter as far as such meets are concerned. In 1995, then chief minister Lalu Prasad organised a big NRI meet in Patna to attract investment to the state. It was a mega event but the net result was zero as no NRI investors came forward."

Chief Minister Nitish Kumar, in his inaugural speech at the meet, clarified that it was not meant to attract investors but to deliberate on issues with experts from across the world on the development of Bihar.

"The meet has nothing to do with investments and it is not held to woo investors. It is to discuss and debate issues concerning BIhar's development," Kumar said.

Nepali Prime Minister Baburam Bhattarai had on Friday inaugurated the second global meet on changing Bihar. The first global meet on Resurgent Bihar was held in 2006.

But Janata Dal - United leader Vashisht Narain Singh claimed that the 'changing face of Bihar' is a big brand in itself and the meet is to seek help to accelerate the momentum of high growth and development.

The state government has reportedly spent over Rs three crore for the meet. 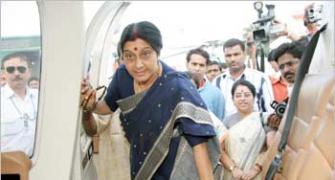 'Sushma Swaraj is a better bet than Narendra Modi' 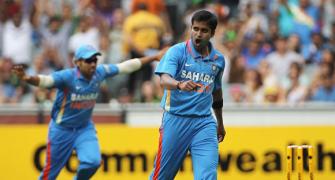 There are a few areas I can improve: Vinay Kumar