Opposition determined to make a fight of presidential poll

The opposition is likely to put up a joint candidate for the July 18 presidential election despite not having numbers on its side, and consultations in this regard have already begun. Sources said that Leader of Opposition in Rajya Sabha Mallikarjun Kharge has reached out to leaders of some opposition parties and sought their views for a joint opposition candidate who can be fielded.

Some opposition parties are of the view that they should not give a walkover to the ruling dispensation but put up a fight, the sources said.

CPI Rajya Sabha member Binoy Viswam said the Congress had reached out to him to discuss a "common candidate".

"Mallikarjun Khargeji called and consulted about a common candidate for the  presidential election. I told him that the CPI would support a common candidate with secular credentials and progressive outlook. He replied that Madam Soniaji and the Congress Party also have the same position," Viswam said in a tweet.

"Consultations for the presidential election have begun among various opposition parties," a senior opposition leader told PTI, adding that once a consensus is arrived at, a joint candidate may be put up.

The Bharatiya Janata Party-led National Democratic Alliance is comfortably placed to win the presidential election with its vote share touching the 50 per cent mark of the total electors.

While there are 776 MPs of both Lok Sabha and Rajya Sabha, each having 700 votes, there are as many as 4033 legislators in states with different votes who will also elect Ram Nath Kovind's successor.

Though the final list of electors will be notified after the bye-elections to three Lok Sabha seats and the Rajya Sabha polls to 16 seats, the NDA has 440 MPs in its favour while the opposition United Progressive Alliance has around 180 MPs, besides 36 MPs of the Trinamool Congress who normally support the opposition candidate.

The Congress and the BJP are likely to win six more Rajya Sabha seats in the June 10 election and the UPA partners may bag three seats more.

This includes 3,08,000 votes with the support of its MPs along with that of its allies.

The NDA candidate may get the support of some regional parties including the AIADMK, the BJD and the YSRCP for its candidate in the presidential poll.

Among the states, the BJP has the maximum of 56,784 votes from Uttar Pradesh where it has 273 MLAs. Each MLA in Uttar Pradesh has the maximum vote of 208. The NDA will get its second-highest votes among states from Bihar where with 127 MLAs, it will get 21,971 votes as each legislator has 173 votes, followed by 18,375 votes from Maharashtra where it has 105 MLAs and each has 175 votes.

The UPA, on the other hand, has a little over 1,50,000 votes from among its MPs and will get around the same number of votes from its legislators in states.

Opposition candidates in the past too have been getting a little more than 3 lakh votes in the previous elections for the highest post in the country.

The value of the vote of a member of Parliament has gone down to 700 from 708 in the presidential polls this time due to the absence of a legislative assembly in Jammu and Kashmir.

The value of the vote of an MP in a presidential election is based on the number of elected members in legislative assemblies of states and Union territories, including Delhi, Puducherry and Jammu and Kashmir.

Elections will be held on July 18 to elect incumbent Kovind's successor, the Election Commission announced on Thursday.

The nominations can be filed after the issue of notification on June 15 till June 29, Chief Election Commissioner Rajiv Kumar told a press conference. 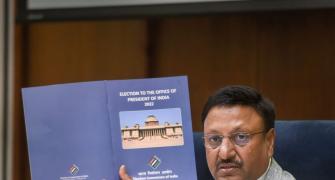 You too can contest the presidential election if... 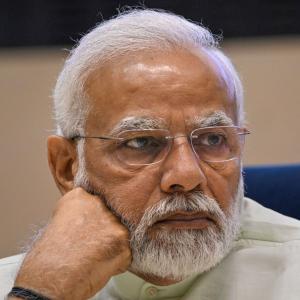