The Delhi police prosecutor on Friday compared the alleged planning of the February 2020 riots with that of the 9/11 terror attacks in the US while opposing former Jawaharlal Nehru University student Umar Khalid's bail plea. 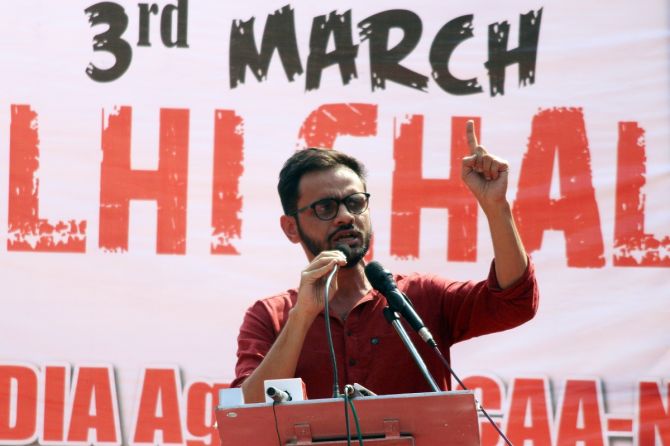 Special public prosecutor Amit Prasad drew the parallels while accusing Khalid of organising a conspiracy meeting and supervising the site of protest against the Citizenship (Amendment) Act.

He said that a facade of secular protest was created whereas the protest was planned and tested.

Opposing his bail plea before additional sessions judge Amitabh Rawat, the prosecutor said, "Just before 9/11 happened, when all the people were involved, they reached a particular place and took training. A month before that, they moved to their respective positions. That is what is relevant in this case also."

He went on to say, "The reference to the 9/11 episode is very relevant. The person who was behind 9/11 never visited the US. The conspiracy meeting happened in Malaysia. There were not WhatsApp chats available at the time. Today we have documents available that he was part of the group. There is foundation to show that violence is likely to happen."

He further told the court that the issue regarding the 2020 protests was not CAA or NRC but to embarrass the government and take such steps that it gets highlighted in international media.

"Issue was not CAA-NRC. The issue was you had to somehow embarrass the government. In the process of embarrassing the government, you take steps which will reflect in the international media," SPP Prasad said.

On the last date of hearing, the prosecutor told the court that all the protest sites were picked because of their proximity to mosques, but were purposefully given secular names.

Khalid and several others have been booked under the Unlawful Activities (Prevention) Act, a stringent anti-terror law, and are accused of being the "masterminds" of the riots which had left 53 people dead and over 700 injured.

The arguments on their bail pleas have been going on for more than five months.