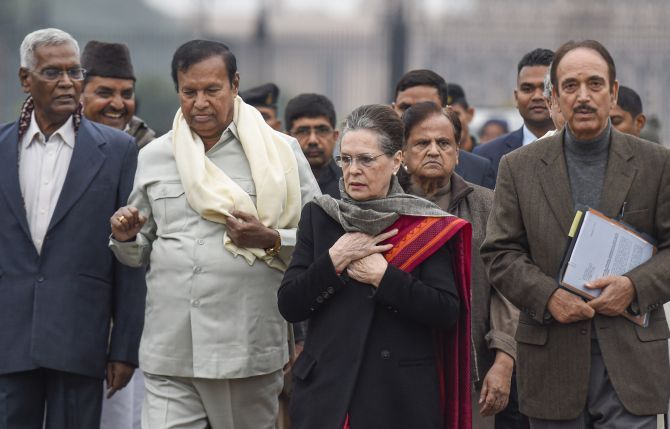 Opposition leaders on Tuesday knocked on the doors of President Ram Nath Kovind, seeking his intervention in repealing the 'unconstitutional and divisive' citizenship amendment law and forming a commission of enquiry to probe violent protests and the police action.

Amidst protests against the law in parts of the country, a delegation of leaders of a dozen opposition parties, led by Congress president Sonia Gandhi, submitted a memorandum to the president appealing to him to 'advise' the government to withdraw the legislation and 'safeguard our Constitution from being violated'.

Talking to reporters later, Gandhi alleged the Modi government was ‘shutting down’ people's voices and bringing legislations which are not acceptable to them.

"...(we) met the President to plead with him to intervene in the situation in the Northeast, which is now spreading throughout the country...because of the Act. It is a very serious situation. We fear that it may spread even further. We are anguished at the manner in which the police have dealt with peaceful demonstrations across India," she said.

"I think you all have seen that the BJP government...seems to have no compulsion when it comes to shutting down people's voices and implement a legislation, which do not seem to be acceptable to the people and to us in a democracy," she said. 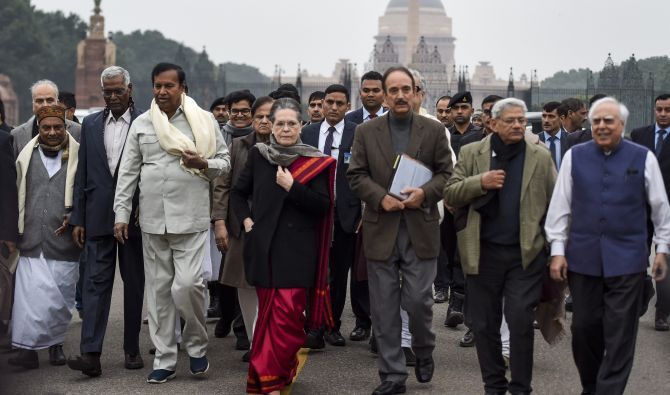 She said police personnel entered women's hostels in Jamia Millia Islamia and 'mercilessly' beat up students who were demonstrating, which is their democratic right.

Communist Party of India-Marxist leader Sitaram Yechury said the President was the custodian of the Constitution.

"We have said that he cannot allow his government to violate the Constitution in this brazen manner. We urged him to give his advice to the government to withdraw this law," he told reporters.

Trinamool Congress leader Derek O'Brien said, "We have asked the President to please advise the government to withdraw this diabolical, divisive act. This act will affect the poorest of the poor."

On Prime Minister Narendra Modi alleging that certain groups with vested interests are trying to create disturbance and helping Pakistan, Congress leader Kapil Sibal said, "We challenge the prime minister to have a debate with us.

Samajwadi Party leader Ram Gopal Yadav said, "We have urged the President that the fears expressed by us in Parliament during the passage of the bill are proving right. This is a law that is taking the country towards its division.

"The CAA has put fear in the minds of the people and it will have bad results. Our government is giving an opportunity to break the country."

"We urged the President to keep the country united and not allow it to divide the country," he said.

Congress leader Ghulam Nabi Azad said there were around 14 to 15 political parties which were to come, but leaders of some of the parties could not come.

"This law is not in the interest of the country as it divides people. They do not bother about the country," he alleged. 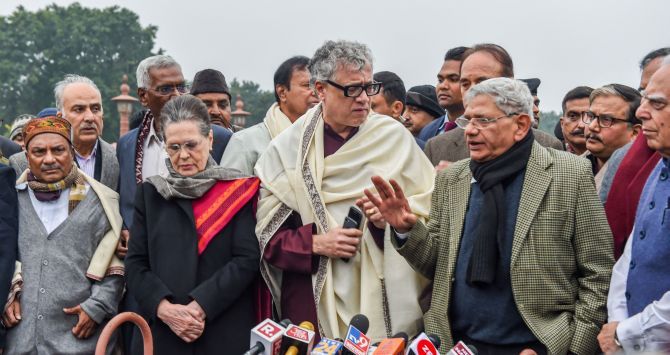 CPI leader D Raja said the President is the head of the Indian state and the custodian of the Constitution and he should intervene on the violence and stop the brutal attack on students.

"The CAA is unconstitutional. When there is turmoil in the country, we urge the president to intervene," he said.

He also said that National Register of Citizens (NRC), implemented in Assam, should not be extended to other parts of the country.

National Conference's Hasnain Masood said the President was the trustee of democracy and should intervene, while Manoj Jha of the RJD said the opposition stood in solidarity with various movements against the law.

Indian Union Muslim League's Mohammed Bashir said, "We have explained (to the president) the sorrows and anxiety of the people of the country. We appealed to him to give justice to us."

Sirajuddin Ajmal of All India United Democratic Front said the citizenship act was against the Assam Accord and the current situation was going against the interests of the country. "The Act is against humanity and is unconstitutional."

In the memorandum to the president, the parties said, "We appeal to you to safeguard our Constitution from being violated. We urge you to intervene on the matter and advise the government to immediately withdraw (Repeal) the Citizenship Amendment act."

On the protests and subsequent police action, they wrote, "Legitimate dissent is at the heart of democracy. Some are peaceful protests. While there may be miscreants and anti-social elements who may be responsible for isolated acts of vandalism, the entire student community must not be held responsible and be targeted.

"The prime minister, instead of appealing for calm, made a comment, which is inconsistent with the status of the office he holds. He said that the rioters could be 'identified from their clothes'.

"By any standard, this brand of politics is unjustified. If persons holding the highest offices in the country seek to, through their statements, serve narrow sectarian interests, it would dismantle the constitutional edifice that has been so carefully built since Independence."

The parties requested the president to 'intervene in this matter and ask the government to establish a commission of enquiry to ensure that all those guilty for perpetuating violence in whatever form be brought to book'.

"If the legitimate constitutional right to protest is sought to be muzzled in this fashion, our democracy will be destroyed. We exhort you to protect the federal structure of the nation and to ensure that this federal structure is not disturbed by the government of India by abusing state power," it said.