With pillows and mosquito repellants, MPs up for night-long protest in Parl 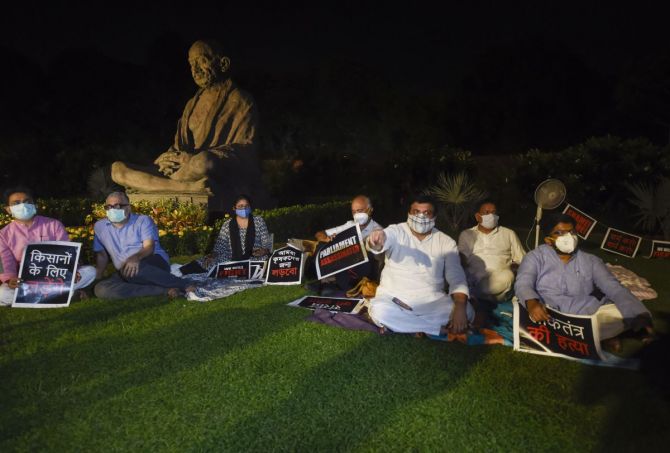 Congress leader Digvijaya Singh sat with the protesting parliamentarians for almost four hours, one of the suspended MPs told PTI as they sang patriotic songs, surrounded by placards hanging on strings with slogans in support of farmers.

One of the main concerns for the MPs was the health of two senior leaders who are diabetic -- Congress' Ripun Boren and Communist Party of India-Marxist's Elamaram Kareem, who are both over 65 years of age.

"We are making sure that we are all hydrated and we have enough water," Trinamool Congress MP Derek O'brien said.

"Refreshments are also coming in from the homes of Opposition MPs at regular intervals to ensure that their sugar levels don't drop. It's a wonderful team effort and we are not going to stop," another senior leader said.

An ambulance is also on standby for emergency use in case any of the protestors fall ill.

The MPs will be able to use the Rajya Sabha toilets as long as the Lok Sabha proceedings are underway, but after that they will have to use the toilets at the reception, another MP said. 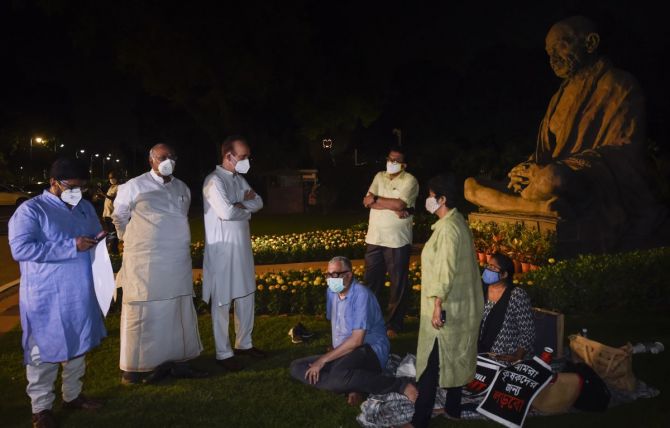 The protesting MPs are carrying not just their beddings with pillows and blankets but mosquito repellents as well to shield themselves from the vectors.

"We would like the government to know that this is an indefinite protest," O'Brien said.

AAP's Sanjay Singh said, "We will continue protesting against the farmer bills until the Modi government provides a rationale behind passing these bills without having the required votes".

The motion was adopted by voice vote amid protests.

During the day, the protests saw MPs from various parties like Congress, CPI-M, Shiv Sena, JD-S, TMC, CPI and the Samajwadi Party joining in.

In the evening, many Lok Sabha MPs trickled in to show their support to the suspended MPs who were sitting in protest.

Other leaders who came by include Shiv Sena's Sanjay Raut, NCP's Supriya Sule, Dravida Munnetra Kazhagam's Kanimozhi and Tiruchi Siva, who carried hot idlis for the protestors from his residence.

Monday was Congress MP Rajeev Satav's birthday and his wife and daughter came especially to Delhi to celebrate it. However, he was at the protest site since morning.

The protest by the MPs is being held at a time when around 30 parliamentarians have tested positive for the coronavirus disease.