Only mutual understating with govt can end farmers' protest: Tikait

Bharatiya Kisan Union (BKU) leader Rakesh Tikait on Monday said the ongoing protest against the three central agriculture laws will end only with a mutual understanding with the government and not by the intervention of the court, according to a release. 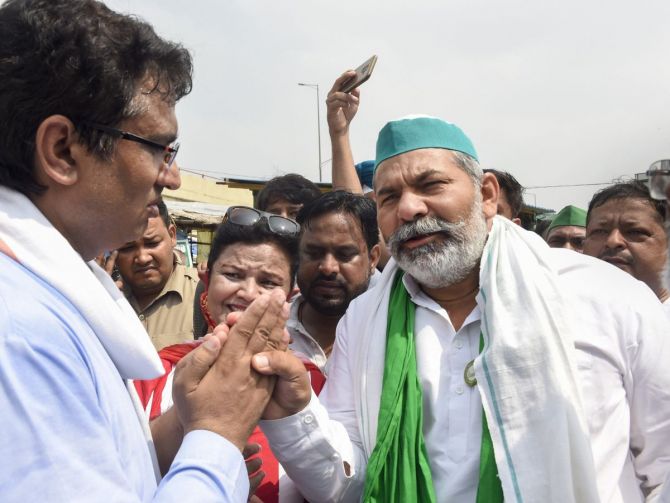 On Monday, the Samyukta Kisan Morcha, an umbrella body of 40 farm unions, observed a national shutdown to mark one year since President Ram Nath Kovind gave his assent to the three controversial laws and 10 months since thousands of farmers set up camp at Delhi's border points to voice their protest.

Speaking at the 11th Bhartiya Chhatra Sansad virtually, Tikait appealed to young people to step out of their homes and join the 'revolution', said a release issued by the organisers.

'Today the country witnessed Bharat Bandh. I feel the government is making senseless amendments to the laws and policies. The government wants to sell the valuable resources of the country, they want to sell the lands,' the release quoted Tikait as saying.

He said it is high time for the youth to step out of their homes and join the revolution.

'I feel this will strengthen the revolution immensely,' he added.

Tikait also said if the government continues to dismantle the resources, one day India will be known as 'Mazdoor colony' and only labour class (will be left) in the country.

'The protest will get over only with a mutual understanding with the government and not with the intervention of the court,' Tikait said.

While suspending the implementation of the three farm laws, the Supreme Court had constituted a Committee on January 12, 2021.

'We are absolutely against privatisation and we will sit as long as this bill (laws) are taken back,' he added.

Farmer groups have alleged that these laws will end the 'mandi' and the MSP (minimum support price) procurement systems and leave cultivators at the mercy of big corporates.

The government has rejected these apprehensions as misplaced and asserted that these steps will help increase farmers' income.