One year on, life in shreds for Kashmir's 'human shield'

'What was my mistake? Going to the polling booth and casting my ballot?'

'Is this the message that India wants to send to Kashmir?' 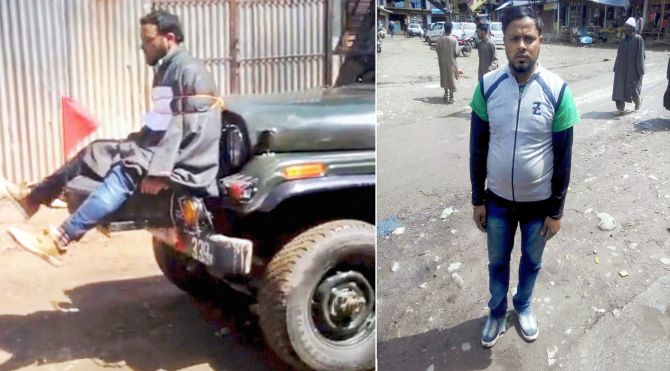 An embroidery artisan who created magic on fabric till a year ago and now shunned by neighbours as the army's "human shield" against stone-pelters, Farooq Ahmed Dar is a broken man, struggling to pick up the threads of his life.

Suffering from insomnia and depression, boycotted by villagers branding him a government agent and unable to find a job, even as a manual labourer, the 28-year-old says his life was upended exactly 12 months ago.

On April 9 last year, a team led by Major Leetul Gogoi tied Dar to the bonnet of an army jeep to escape heavy stone pelting in central Kashmir's Budgam district, the image going on to make global headlines and spotlighting once again the civilian-security polarisation in the Valley.

It was election day in the Srinagar Lok Sabha constituency and Dar says he was on his way to cast his vote, braving the boycott call by separatist organisations.

Eight people were killed in police firing on the day.

Investigations by central agencies and local police backed Dar's account of events of the day, blowing away the army's claim that he was a stone-pelter.

Investigations found he was on his way to his sister's place for a condolence visit after voting when the army picked him up and beat him mercilessly before tying him with ropes and parading him through nearly 28 villages.

"What was my mistake? Going to the polling booth and casting my ballot?” Dar asked with tears rolling down his cheek.

"I am unable to sleep. Even medicines are ineffective. No one is giving me any work. The government is silent and the judiciary is moving at its own pace," Dar told PTI in a an interview.

Prodded to speak about his life after the incident, Dar said he faced a social boycott as people in his village Chill, in Budgam district, had distanced themselves after they learnt he had participated in the election process.

"I regret moving out of my house on that day," he added in Kashmiri, as a friend who had stuck by him through the 12 months consoled him.

One of five brothers and sisters, Dar, whose father passed away some years ago, said the incident has snatched his fundamental right to live.

"No one is giving me any work. I decided to work as a labourer but my human shield tag walks a pace ahead of me. At times, I wonder whether such an act of cowardice could be rewarded by the army. Is this the message that India wants to send to Kashmir?” he asked, referring to Gogoi being commended by the army chief for his act.

"I am not a politician nor do I intend to become one. But if casting a ballot is crime, who is going to come out to vote," Dar said.

He said his mother Fiza Begum suffers from heart disease and he does not have money for her treatment. "I have been living on dole from my friends and some relatives as I have no source of income.

"I wanted to make it big by making a beautiful Kashmiri shawl but I became famous for all the wrong reasons," Dar said.

His ordeal has entered mainstream discourse. The human shield episode is even referenced in the recent Bollywood film Baaghi 2, where the hero, an army officer, is reportedly shown tying a civilian to his jeep for disrespecting the national flag, leading to criticism that the film was trying to glorify human rights abuses.

But this was rejected by the state's PDP-BJP government, which said there were no rules under which it could pay the money.

"It is not about the money but my dignity. If it is proved I was pelting stones, hang me. Or punish those responsible for my miserable present and and bleak future," Dar said with a note of desperation in his voice.

"If Ahsan Untoo and advocate Zafar Qureshi had not highlighted my plight, the world would have never known what I underwent," he said.

Mohammad Ashan Untoo, head of the International Forum for Justice and Human Rights group in the Valley, has filed a review petition against the decision to not give Dar compensation in the State Human Rights Commission.

A plea on the matter has also been filed in the Jammu and Kashmir high court.

"One day we will get justice," Untoo said.

In his view, New Delhi should be eager to hear the case of a person who believes in democracy but has become a victim of the army's high handedness.

Untoo added that is also planning to sue the producer and director of Baaghi 2.

"An act of cowardice is being used to stoke so-called nationalistic passions,” he said.

The video of Dar tied to the bonnet of the Gogoi's jeep had gone viral, triggering a public outcry.

Some former generals said the move went against the "ethos" of the Indian Army.

The state police registered a case of abduction with intent to cause grievous hurt, wrongful confinement and criminal intimidation.

The police, in its investigations, said Dar was "tied to an army vehicle as human shield under threat, kept in wrongful confinement and has been paraded around...”