One nation is spreading terror in South Asia: PM Modi at G20

Prime Minister Narendra Modi on Monday launched a sharp attack on Pakistan, saying that "one single nation" in South Asia is spreading the "agents of terror" as he told the G20 leaders that those who sponsor the menace must be sanctioned and isolated, not rewarded. 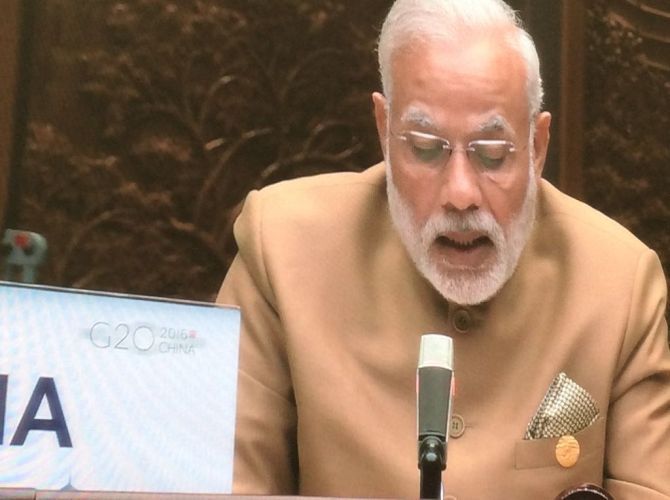 Soon after Prime Minister Modi's assertion, the G20 countries, including India, also came down heavily on terrorism as they vowed to tackle all sources, techniques and channels of terror financing.

"Indeed one single nation in South Asia is spreading these agents of terror in countries of our region," Prime Minister Modi said in an apparent reference to Pakistan.

"We expect the international community to speak and act in unity, and to respond with urgency to fight this menace. Those who sponsor and support terrorism must be isolated and sanctioned, not rewarded," Modi said in his intervention during the concluding session of the meeting of the world's 20 strong economies.

The G20, in its communique released after the conclusion of the two-day summit, said, "We strongly condemn terrorism in all forms and manifestations, which poses serious challenges to international peace and security and endangers our ongoing efforts to strengthen the global economy and ensure sustainable growth and development."

The G20 nations reaffirmed their solidarity and resolve to fight terrorism in all its forms and wherever it occurs. They vowed to tackle all sources, techniques and channels of terrorist financing, including extortion taxation, smuggling of natural resources, bank looting, looting of cultural property, external donation, and kidnapping for ransom.

Prime Minister Modi earlier said India appreciates the G20's initiative on combating the financing of terrorism and asserted that all countries should meet the Financial Action Task Force standards.

"Growing forces of violence and terror pose a fundamental challenge. There are some nations that use it as an instrument of state policy. India has a policy of zero tolerance to terrorism. Because anything less than that is not enough," Modi said.

The G20 communique asked the member countries to implement the FATF's new Consolidated Strategy on Combating Terrorist Financing and back its call for effective implementation of its operational plan.

"In confronting terrorism, we remain committed to effectively exchanging information, freezing terrorist assets, and criminalising terrorist financing. We call for the swift, effective and universal implementation of the FATF standards and of the provisions of the UN Security Council resolution 2253 worldwide," the communique said and welcomed the progress achieved by the UN-backed FATF.

"We call on the FATF to reflect by March 2017 on ways to progress in strengthening its traction capacity and enhanced effectiveness of the network of FATF and FATF-style regional bodies," it said.

Acknowledging that the G20 meeting is taking place at a time when the global economic recovery is progressing, resilience is improved in some economies and new sources for growth are emerging, the communique said downside risks remain due to potential volatility in the financial market, fluctuations of commodity price, sluggish trade and investment, and slow productivity and employment growth in some countries.

"We call on G20 members, the International Monetary Fund and World Bank Group to intensify their support for domestic capacity building to help countries improve their compliance with global anti-money laundering and countering the financing of terrorism and prudential standards.

The G20 countries also emphasised on financial transparency and effective implementation of the standards on transparency by all, "in particular with regard to the beneficial ownership of legal persons and legal arrangements, is vital to protect the integrity of the international financial system, and to prevent misuse of these entities and arrangements for corruption, tax evasion, terrorist financing and money laundering."

Modi's remarks at the G20 Summit came a day after India called on other BRICS members to intensify joint efforts to combat terrorism.

The comments also assume significance amid a war of words between India and Pakistan in the aftermath of the unrest in the KashmirValley that broke out on July 8 after Hizbul commander Burhan Wani was killed by security forces.